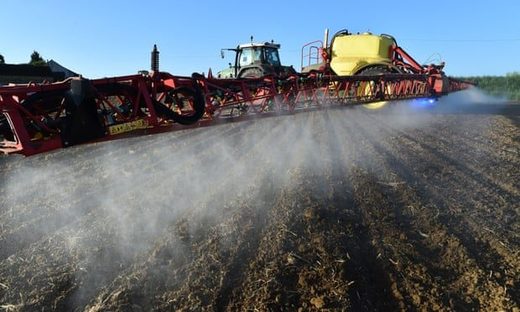 © Photograph: Jean-François Monier/AFP via Getty Images
Hundreds of studies done by US contract laboratories in the 1970s, 80s and 90s were found to be fraudulent, including some tests used by Monsanto.

Not again. News out of Europe last week revealed that more than 20 scientific studies submitted to regulators to prove the safety of the popular weedkilling chemical glyphosate came from a large German laboratory that has been accused of fraud and other wrongdoing.

The findings come amid global debate over whether or not glyphosate causes cancer and other health problems and if regulators and chemical companies proclaiming the chemical’s safety actually have credible science on their side.

Amid a government investigation into the Laboratory of Pharmacology and Toxicology (LPT), investigators representing three European non-profit consumer advocacy groups are raising concerns about the validity of the glyphosate studies generated by the Hamburg facility. No significant concerns with glyphosate were found, according to the tests, three of which looked for glyphosate-related mutagenicity. Monsanto and other chemical companies needed those studies and others to submit to regulators in order to obtain re-approval to sell glyphosate herbicide products in Europe.

We don’t know if the LPT glyphosate studies were in any way falsified, but the consumer groups, Corporate Europe Observatory, PAN Germany and Global 2000, say they now have to be considered suspect. And, they say, the scandal underscores the risks of a regulatory system that relies heavily on the findings of industry-funded studies when determining if products are safe.

There certainly appears to be ample cause for concern. The Laboratory of Pharmacology and Toxicology (LPT), which is accused of abusing test animals in addition to doctoring data, was certified as adhering to “good laboratory practices.” But multiple whistleblowers who worked in the lab have said that falsifying study results was routine.

Harald Ebner, a member of the German Parliament Bundestag, said the LPT laboratory “has obviously delivered the desired results and swept unpleasant results under the carpet”. All LPT scientific work must now be investigated, including the studies submitted to help support glyphosate approvals in Europe, he said.

The German Federal Institute for Risk Assessment says it is monitoring the situation but sees no reason to question the overall assessment of glyphosate safety given the 24 GLP studies were part of more than 900 other studies or papers that were part of the European glyphosate evaluation.

News of the laboratory fraud allegations comes at a time of growing fears among consumer and environmentalists that corporate-driven “science” is doing much to protect corporate profits but little to protect public health and safety. When corporations pay for the research, invariably the findings seem to support the safety of whatever products the corporations are trying to sell.

Hundreds of studies done by US contract laboratories in the 1970s, 80s and 90s were found to be fraudulent, including some tests used by Monsanto in representations to the US Environmental Protection Agency regarding the company’s glyphosate-based Roundup herbicide.

The allegations of fraud at the German lab also add to evidence of Monsanto, which was bought by Bayer AG in 2018, influencing scientific studies into the safety of their products. Internal Monsanto files obtained in litigation show multiple tactics were employed by the company and industry allies to manipulate scientific papers about its products, including using ghost-writing research papers and secret funding front groups to support regulatory approvals.

Surely one need not be a cynic to recognize that corporate-funded science is likely to be biased in favor of corporate product approvals – even if that bias might come at the expense of public safety. It’s foolish to pretend otherwise, in light of the examples of deception and fraud that have accumulated over the years.

The German laboratory in question is set to close down later this month. But the larger problem persists.

It is well past time for reform of a badly broken system that lacks both truth and transparency. We must be able to trust the integrity of scientific research as we work to protect our families, our communities and our planet.

Regulatory bodies should reform their practices of relying on industry-funded studies, and when fraud is found – be it in the laboratory or in ghostwritten research papers – punishment should be swift and unforgiving.

Science should never be for sale.

Carey Gillam is a journalist and author and a public interest researcher for US Right to Know, a not-for-profit food industry research group. She is a Guardian US columnist