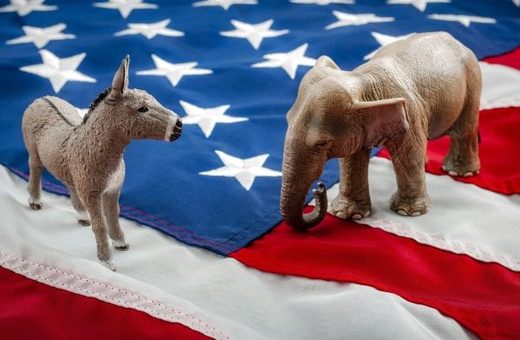 Less than half of all people in the United States adopt their parents’ political party affiliation, according to new research published in the British Journal of Political Science. The study also discovered some factors that appear to influence whether parents successfully transmit their partisan identities to their children.

“Most parents want to raise their children with the ‘right’ values. What is right, of course, depends upon the parent but understanding what factors might aid or harm a parent’s ability to successful transmit their values to their children is important to many, particularly in this era of hyper polarization,” said study author Pete Hatemi, a distinguished professor at Penn State University.

“Generally speaking, if there has been one constant in the study of political behavior it was the belief that political orientations are reliably transmitted from parents to children. The problem is that the evidence of this belief has almost entirely relied upon the concordance between self-reported parent and child values.”

“Basically, researchers have simply treated parent-child correlation as evidence of parent-to-child transmission. Moreover, the generally held view has been that parent-child agreement on political orientations is the norm — a majority of children know and want to adopt their parents’ values, and parents simply instill values into children. Oddly enough, these assumptions have hardly been tested.”

The researchers examined data from 4,852 parent-child dyads. The data came from three large longitudinal studies: the Youth-Parent Socialization Study, the Health and Lifestyles Study and the National Longitudinal Survey of Youth. Importantly, the studies not only assessed the party identification of parents and their children, they also assessed children’s perceptions of their parents’ political beliefs and included measures of the parent-child relationship.

Hatemi and his colleagues found that fewer than half of the children correctly perceived and subsequently adopted their parents’ party identification. “That is, most parents do not successfully transmit their values to their children,” he told PsyPost.

“There are at least two steps to transmitting values to children. First, children must accurately perceive their parent’s values, then they must choose whether or not to adopt those values. This is important because almost all prior approaches have overstated parent-to child transmission — they treated children who correctly perceived and adopted their parents values as the same as those who misperceived and rejected those values (and vice versa).”

The researchers also uncovered several factors related to a child’s rejection or acceptance of their parents’ party identification.

“This is important because we found that the children who often want to be like their parents end up adopting the wrong values because they actually believed their parents to be completely different. And education, previously thought to have little role in transmission, does not influence a child’s ability to know their parents’ affiliation, but appears to make children more likely to reject whatever that they believe their parents to be.”

All research includes some limitations, and the current study is no exception.

“Our data mainly covers the 70s, 80, and 2000s but there is a real lack of studies that have parent-child cross reports. Our next step is to collect data from 2020 forward to see if this pattern holds true,” Hatemi noted.

“Our models are designed to offer a first step, a baseline model if you will. Additional factors, such as institutions, differing political contexts, including other countries, global conditions and more information on the children and parents is needed, particularly emotional and cognitive aspects.”

“The current study focused mainly parent to child transmission, but a critical next step is to address the role of child to parent transmission, which is increasingly prevalent in first-generation families. A growing literature is concentrating on child-driven discussion in which child experiences bring new information into the home and allows parents to become more politically aware,” Hatemi said.

The study, “The Role of Child Perception and Motivation in Political Socialization“, was authored by Peter K. Hatemi and Christopher Ojeda.