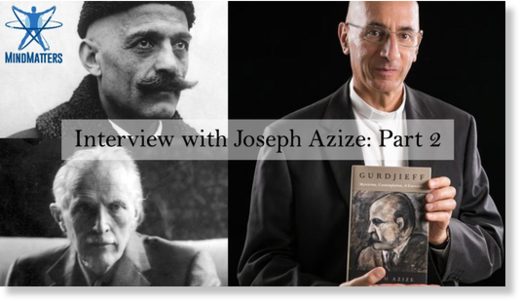 Delving deeper into some of G.I. Gurdjieff’s ideas and practices, we continue our discussion with Father Joseph Azize, author of the recently published book Gurdjieff: Mysticism, Contemplation, & Exercises. Among a broad range of related topics covered, Fr. Azize describes the esoteric dynamics of prayer as it relates to the “Four Ideals” exercises and the types of impressions that we may access and ‘digest’ as a result. The detrimental effects of ‘negative emotions’ are also examined – as they relate to the growing irrationality that surrounds us, and the necessary work of growing one’s consciousness and conscience to counter these manifestations for one’s self, and for others. Further to this is an increased awareness of one’s own thinking and feeling centers and how strengthening these ‘bodies’ plays such a large part in the growth of an individual.

On today’s MindMatters we look back to the remaining fragments of G.I. Gurdjieff’s teachings and exercises so that they may not be lost to obscurity, and forward, because this time we’re living in necessitates their use. In addition to these issues, Fr. Azize speaks of his own synthesis of these ideas regarding his work in the priesthood and the Christian tradition. Finally, a brief but informed survey of some other important Gurdjieff books. In these times of accelerated change, what if anything can Gurdjieff’s work do to assist us in our response to it, and our working on ourselves?

Suggestions for a Basic Gurdjieff Bibliography (courtesy of Fr. Azize)

Approaches to the Teaching:

Aside from Amazon, Fourth Way books can be purchased at By The Way Books. Book Studio has published numerous important volumes, including original manuscript versions of Gurdjieff’s works, and previously unpublished talks and notes.