Thinking about your thinking: 7 ways to improve critical thinking skills

Thinking about your thinking: 7 ways to improve critical thinking skills

When I was in 7th grade, my U.S. history teacher gave my class the following advice:

Your teachers in high school won’t expect you to remember every little fact about U.S. history. They can fill in the details you’ve forgotten. What they will expect, though, is for you to be able to think; to know how to make connections between ideas and evaluate information critically.

I didn’t realize it at the time, but my teacher was giving a concise summary of critical thinking. My high school teachers gave similar speeches when describing what would be expected of us in college: it’s not about the facts you know, but rather about your ability to evaluate them.

And now that I’m in college, my professors often mention that the ability to think through and solve difficult problems matters more in the “real world” than specific content.

Despite hearing so much about critical thinking all these years, I realized that I still couldn’t give a concrete definition of it, and I certainly couldn’t explain how to do it. It seemed like something that my teachers just expected us to pick up in the course of our studies. While I venture that a lot of us did learn it, I prefer to approach learning deliberately, and so I decided to investigate critical thinking for myself.

What is it, how do we do it, why is it important, and how can we get better at it? This post is my attempt to answer those questions.

In addition to answering these questions, I’ll also offer seven ways that you can start thinking more critically today, both in and outside of class.

What Is Critical Thinking?

Critical thinking is the intellectually disciplined process of actively and skillfully conceptualizing, applying, analyzing, synthesizing, and/or evaluating information gathered from, or generated by, observation, experience, reflection, reasoning, or communication, as a guide to belief and action.

– The Foundation for Critical Thinking

The above definition from the Foundation for Critical Thinking website is pretty wordy, but critical thinking, in essence, is not that complex.

Critical thinking is just deliberately and systematically processing information so that you can make better decisions and generally understand things better. The above definition includes so many words because critical thinking requires you to apply diverse intellectual tools to diverse information.

Ways to critically think about information include:

That information can come from sources such as:

And all this is meant to guide:

You can also define it this way: Critical thinking is the opposite of regular, everyday thinking.

Moment to moment, most thinking happens automatically. When you think critically, you deliberately employ any of the above intellectual tools to reach more accurate conclusions than your brain automatically would (more on this in a bit).

This is what critical thinking is. But so what?

Why Does Critical Thinking Matter?

Most of our everyday thinking is uncritical.

If you think about it, this makes sense. If we had to think deliberately about every single action (such as breathing, for instance), we wouldn’t have any cognitive energy left for the important stuff like D&D. It’s good that much of our thinking is automatic.

We can run into problems, though, when we let our automatic mental processes govern important decisions. Without critical thinking, it’s easy for people to manipulate us and for all sorts of catastrophes to result. Anywhere that some form of fundamentalism led to tragedy (the Holocaust is a textbook example), critical thinking was sorely lacking.

Even day to day, it’s easy to get caught in pointless arguments or say stupid things just because you failed to stop and think deliberately.

But you’re reading College Info Geek, so I’m sure you’re interested to know why critical thinking matters in college.

According to Andrew Roberts, author of The Thinking Student’s Guide to College, critical thinking matters in college because students often adopt the wrong attitude to thinking about difficult questions. These attitudes include:

Doing college level work without critical is a lot like walking blindfolded: you’ll get somewhere, but it’s unlikely to be the place you desire. 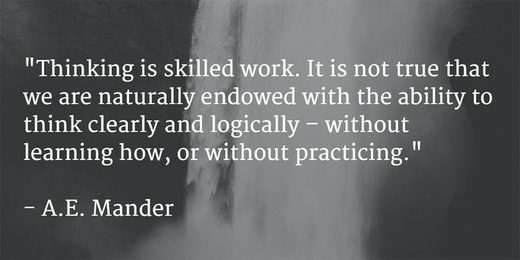 Now we come to the part that I’m sure you’ve all been waiting for: how the heck do we get better at critical thinking? Below, you’ll find seven ways to get started.

“The world is complicated. But does every problem require a complicated solution?”

Sometimes an explanation becomes so complex that the original question get lost. To avoid this, continually go back to the basic questions you asked when you set out to solve the problem.

Here are a few key basic question you can ask when approaching any problem:

“When you assume, you make an ass out of you and me.”

The above saying holds true when you’re thinking through a problem. it’s quite easy to make an ass of yourself simply by failing to question your basic assumptions.

Some of the greatest innovators in human history were those who simply looked up for a moment and wondered if one of everyone’s general assumptions was wrong. From Newton to Einstein to Yitang Zhang, questioning assumptions is where innovation happens.

All these things can be a reality if you just question your assumptions and critically evaluate your beliefs about what’s prudent, appropriate, or possible.

If you’re looking for some help with this process, then check out Oblique Strategies. It’s a tool that musician Brian Eno and artist Peter Schmidt created to aid creative problem solving. Some of the “cards” are specific to music, but most work for any time you’re stuck on a problem.

3. Be Aware of Your Mental Processes

Human thought is amazing, but the speed and automation with which it happens can be a disadvantage when we’re trying to think critically. Our brains naturally use heuristics (mental shortcuts) to explain what’s happening around us.

This was beneficial to humans when we were hunting large game and fighting off wild animals, but it can be disastrous when we’re trying to decide who to vote for.

A critical thinker is aware of their cognitive biases and personal prejudices and how they influence seemingly “objective” decisions and solutions.

All of us have biases in our thinking. Becoming aware of them is what makes critical thinking possible.

A great way to get “unstuck” on a hard problem is to try reversing things. It may seem obvious that X causes Y, but what if Y caused X?

Even if it turns out that the reverse isn’t true, considering it can set you on the path to finding a solution.

If I have seen further it is by standing on ye shoulders of Giants.

When you’re trying to solve a problem, it’s always helpful to look at other work that has been done in the same area. There’s no reason to start solving a problem from scratch when someone has already laid the groundwork.

It’s important, however, to evaluate this information critically, or else you can easily reach the wrong conclusion. Ask the following questions of any evidence you encounter:

Take, for example, a study showing the health benefits of a sugary cereal. On paper, the study sounds pretty convincing. That is, until you learn that a sugary cereal company funded it.

You can’t automatically assume that this invalidates the study’s results, but you should certainly question them when a conflict of interests is so apparent.

6. Remember to Think for Yourself

Don’t get so bogged down in research and reading that you forget to think for yourself-sometimes this can be your most powerful tool.

Writing about Einstein’s paper “On the Electrodynamics of Moving Bodies” (the paper that contained the famous equation E=mc2), C.P. Snow observed that “it was as if Einstein ‘had reached the conclusions by pure thought, unaided, without listening to the opinions of others. To a surprisingly large extent, that is precisely what he had done'”(121).

Don’t be overconfident, but recognize that thinking for yourself is essential to answering tough questions. I find this to be true when writing essays-it’s so easy to get lost in other people’s work that I forget to have my own thoughts. Don’t make this mistake.

7. Understand That No One Thinks Critically 100% of the Time

Critical thinking of any kind is never universal in any individual; everyone is subject to episodes of undisciplined or irrational thought.

You can’t think critically all the time, and that’s okay. Critical thinking is a tool that you should deploy when you need to make important decisions or solve difficult problems, but you don’t need to think critically about everything.

And even in important matters, you will experience lapses in your reasoning. What matters is that you recognize these lapses and try to avoid them in the future.

Even Isaac Newton, genius that he was, believed that alchemy was a legitimate pursuit.

How has critical thinking helped you in and outside the classroom? Are there any important tips I missed? Share them in the comments or discuss them in the College Info Geek Community.