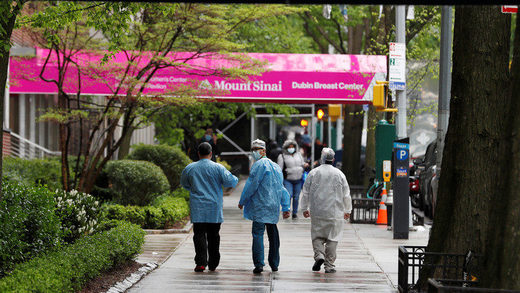 Three children, including a five-year-old boy, have died of a mysterious inflammatory syndrome resembling Kawasaki disease or a toxic shock, Governor Andrew Cuomo said, as the state authorities began an inquiry into the cases.

A total of 73 cases of the new disease, involving toddlers and elementary school children, have been registered in New York to date, the governor’s office has said. The illness is believed to be linked to the novel coronavirus that has been gripping the state for more than two months and has since infected almost 333,000 and claimed more than 26,000 lives.

New York is not the first to report an inflammatory syndrome in children amid the Covid-19 epidemic. Earlier, British doctors voiced concerns about a similar disease described as affecting children in the UK. The illness has often been compared to Kawasaki disease – a rare disorder of the immune-system which usually affects children younger than five years old, causing severe fever and virus-like symptoms.

It is still unclear if the illness registered in children on both sides of the Atlantic is indeed Kawasaki disease. This syndrome has been known for some 50 years, although its exact origins remain a mystery to scientists. The disease itself is, however, considered to be quite treatable if detected in time. The news about children dying would thus appear to be a disturbing development that warrants investigation.

Cuomo has ordered the New York Health Department to study the illness and develop a case definition for it.

“This would be really painful news and would open up an entirely different chapter in our fight against this virus, and the State Department of Health is currently investigating these cases to learn more,” he said, while also calling on people to reach out for help “immediately” if they notice any troubling symptoms in their children.