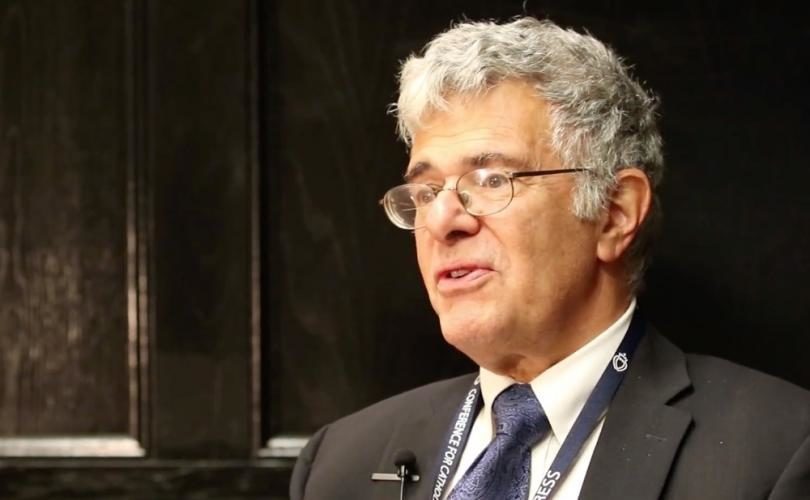 The respected Catholic historian John Rao has written the following incisive reflection on the coronavirus pandemic which places much of the current disturbing situation in context.

For many years, Dr. Rao, who is associate professor of history at St. John’s University in New York City, has run the Roman Forum which was founded in 1968 by Professor Dietrich von Hildebrand as a means of defending Catholic doctrine and culture following internal Church disputes over Humanae vitae.

These lectures, which now take place in Gardone, Italy, and New York City, have become increasingly popular. The Forum is now in its 28th year.

Professor Rao wrote the following May 4 message to members of the Roman Forum and has kindly given permission for it to be published:

“The more the panic grows, the more uplifting the image of a man who refuses to bow to the terror” — Ernst Jünger

The purpose of the Roman Forum is educational, and it would be a dereliction of duty not to make some comment on what we are witnessing around us and what it means for us as Catholics, as citizens, and as civilized men and women. I do not feel competent to discuss the initial cause of a disease that has affected the entire globe, nor would I in any way wish to minimize the real suffering and loss that this malady has entailed for many people. But what I do believe an educator needs to stress is the way in which a controllable pandemic has been transformed into a totally unnecessary pandemonium; a horrifying illustration of the diabolical disorientation accompanying all of the ravages of modernity, and one that has allowed a painfully hollow modern society to titillate itself with the “feel” of living through the Bubonic Plague without actually doing so.

Our Socratic forbears taught us through their “Seeds of the Logos” that the reasoning man does not have to be an expert in a given field to be able to make a competent judgment regarding whether he is dealing with leaders whose advice he should heed or reject as fraudulent. Frauds demand absolute faith in their claims, treating the confused doubter with contempt for his invincible ignorance. Such imposters may seriously believe that they are omniscient experts. But when they tell young or otherwise healthy persons that they are in the same condition as the weakest of the elderly or the already ill; when they say that in order to protect itself the vast mass of the population has to abandon its livelihood, the well-being of its country, the cultural life of its civilization, and the tools required for its eternal salvation they must be dismissed for what they actually are: quacks.

We find ourselves today at the mercy of well educated, possibly well meaning, but ultimately highly dangerous and arrogant guides of this sort. These Masters of Them That Know are pressing us to destroy everything that we hold dear for the sake of creating an antiseptic, barren, soulless world unfit for human beings to live in — and die in — with dignity. It will take calm study when and if this pandemonium ends to determine the full genesis and complexity of the quackery involved, but it certainly is clear that all of the destructive forces that play a role in the modern world, along with all of those who have voluntarily succumbed to them, have had their unfortunate part in it.

These include the media, which have far surpassed their traditional display of criminal irresponsibility by whipping the world into a state of mass hysteria and terrorized paralysis. The media have been accompanied in their work of diabolical disorientation by a political establishment that permits the cowed masses to venture forth from their cells only under the condition of donning the current yellow Star of David: the face mask. Both serve the cause of vaccine mad ideologues who smell a profit to be made from the panicked mob begging for its supposed physical salvation at any cost. So effectively has this work of unleashing a pandemonium been accomplished that it is now hard to determine whether it is the terrorized masses themselves or the actual purveyors of the great dread who are most vigorously encouraging the chaining of men and women to the dark, back wall of Plato’s cave.

Still, as a Catholic educational organization, it is urgently incumbent upon the Roman Forum to note and to lament how much this pandemonium has been voluntarily and quite pathetically accepted by the shepherds of the Church, who have taken flight and allowed the sheep to be handed over to the will of ideological fanatics and their power or money hungry global accomplices.

In our lectures through the last twenty-eight years we have recounted the way in which the French and Russian Revolutions have secularized society and contributed mightily to the destruction of Christendom. Our shepherds in the past suffered and were martyred to try to fend these horrors off. But now the believing population has been deprived of its right to worship openly and to gain access to the sacraments not through the guns and whips of the oppressors, but with the full agreement of the successors of the Apostles.

These sad and lamentable prelates have made it crystal clear to the entire globe that laundromats and abortion mills are more “essential” to the life of man than the grace of Christ. Why would the world possibly take their “magisterial” teaching seriously after that kind of confession? How much of the spiritual literature of the Church must be rewritten to justify their new mentality? How foolish must we consider the priests of the Black Death who perished to give last rites to the sick in comparison with the sensible bishops of the present, huddled in their pointless palaces, warning the clergy of the physical dangers of shepherding the sheep? Admittedly, they are filled with a kind of “holy terror”: the fear that, should they open the doors of the generally empty churches of the “renewal” — where social distancing is actually simple to maintain, even under normal circumstances — someone who enters might claim to have fallen ill and litigate. At that point a true disaster would ensue! The last pieces of property, whose material accumulation has always been the real pride and joy of much of the business minded American Hierarchy, might then be taken away from them.

This Friday, May 8th, 2020, is not only the date when all of this year’s Church History lectures will be made available. It is also the seventy-fifth anniversary of the end of the Second World War. The post-war era has been coming to a conclusion ever since the collapse of the Soviet Bloc in the years 1989-1991, the worldwide havoc wreaked by neoconservative warfare to make the world safe for Pluralism, and the election of a German pope. Now, with this pandemonium, I think we can safely say that we are finished referencing everything to that long dead conflict.

Would that we could proclaim the same for the ravages of modernity! Whether it advances today under the mantra of the “New Normal”, or just yesterday under the terminology of building a “Post-Modernity”, it is the same diabolical, naturalist, anti-Christian, soul killing, and therefore dreadfully boring agenda that the purveyors of Enlightenment have been foisting upon the world for centuries in the name of assuring its final liberation. This sophistic mess of pottage is always presented as being dictated by some absolute necessity or some exciting new insight. And it is in its seemingly more restrained, “health-friendly”, non-violent manner — its Moderate Enlightenment, John Locke, and therefore anti-social, atomistic, consumer materialist manner — that it is now gaining this, its greatest victory in the history of Christendom against a prostrate Catholic Church. How accurate of our chaplain to refer to our stay-in-place Diktat as a “John Locke-down”.

Dear friends, the apparatchiks of the wretched “New Normal” have popularized a fresh farewell greeting that one encounters everywhere when venturing forth wearing the Mask of Oppression: “stay safe”. This is not a farewell greeting appropriate to sons of God seeking a spiritual transformation in Christ ending in the resurrection of the body and eternal life in heaven. This is not a greeting that the Roman Forum suggests that Catholics who are horrified by the flight of our shepherds and our abandonment to the fulfilment of the earthbound visions of dangerous medical evangelists and their preposterous, petty dictatorial political allies should utilize when they trudge back from the godless city streets to their individual prison cells to live out ever more isolated, sterile, “safe” lives.

We have a tremendous battle ahead of us: for our churches, our sacraments, our traditional liturgy, our country, what remains of the glorious cultural life of the West, and of our very means of survival. “Stay strong and Viva Cristo Rey!” should be on our lips as we retreat into our “castles”. But we should retreat into those castles only to steel ourselves spiritually and intellectually to muster the courage needed to contradict the arrogant but confident authorities mandating the “New Normal”. Then we can more confidently lower our drawbridges to undertake ever more determined sorties into a world that must be re-conquered for the King of Kings. Deus lo vult!

“Even if the wounds of this shattered world enmesh you, and the sea in turmoil bears you along in but one surviving ship, it would still befit you to maintain your enthusiasm for studies unimpaired. Why should lasting values tremble if transient things fall?” (Prosper of Aquitaine)