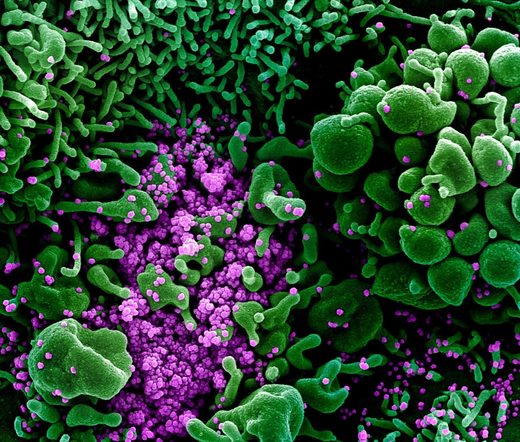 The coronavirus known as SARS-CoV-2, shown in purple, infects a cell, colored in green.Courtesy of National Institute of Allergy and Infectious Diseases

The state knows of the cases now only because of antibody testing, which will begin ramping up this week.

All six cases are considered probable because the people have antibodies, but their cases can never be confirmed, said health department spokeswoman Melanie Amato. The patients were interviewed by their county health departments, who asked them when they felt sick.

The dates listed are their best guesses. There’s no way to know whether the patients were asymptomatic for COVID-19 and just had a cold.

“We rely on the local health department and the person that tested,” Amato said. “It’s all an interviewing process, when they felt cruddy and when they got it.”

One person said they had traveled to California and one to Utah, she said. But health officials don’t know if they contracted the virus there. They will likely never know.

“We actually have a new date of onset. We have found five cases now when the date of onset of symptoms was in January,” Acton said in the statehouse news briefing.

She could not give details when asked at the briefing.

Ohio announced its first three cases, all in Cuyahoga County, on March 10. On Feb. 2, the first coronavirus tests in Ohio came back negative, for two students at Miami University.