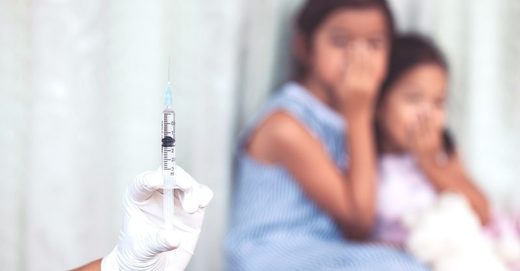 May 22 was a banner day for the encroaching global vaccine police state, with three announcements from the UK signaling what we can surely also expect on this side of the Atlantic. First, the entities rushing to develop an experimental chimpanzee-derived COVID-19 injection — the conflict-of-interest-ridden Oxford Vaccine Group, Oxford’s Jenner Institute and pharmaceutical giant AstraZeneca — announced the imminent expansion of their clinical trials to a wider age range, including children aged 5 to 12 years, despite “troubling results” when they administered the vaccine to rhesus monkeys. Endorsing the scale-up of the experiment to more than 30,000 eventual participants, including a trial to evaluate the vaccine in young children, the U.S. Department of Health and Human Services (HHS) immediately awarded a generous “$1.2 billion cash injection” for the UK effort (provided without any input from economically strapped American taxpayers). Then, to cap the day off, a UK Court of Appeal ominously ruled that local authorities can vaccinate children in foster care against their parents’ wishes, deploying the argument that “it is in the best interests of children to be immunized unless there is a specific reason for them not to be.”

Anyone who has been paying a modicum of attention knows where the vaccine cartel wants this to end up — with a mandated injection that will sneak high-risk gene-altering nanoparticles, Trojan-horse-style, into our children, and eventually, into all of us. However, the use of children as a wedge to implement mandates for adults — the age group most affected by COVID-19 — would deny children the equal protection of law because the vaccine will not be primarily for their benefit.

A first step on this slippery slope will be to persuade unwitting parents to offer up their children on the altar of COVID-19 vaccine experimentation. It is unclear how the researchers will go about convincing parents to take this step, particularly because the most recent evidence — a systematic review of 45 scientific papers and letters — confirms that children account for only 1% to 5% of diagnosed COVID-19 cases and experience a milder course of disease, a better prognosis than adults, and death “extremely” rarely. Subjecting children to the hazards of clinical trials for a risk this low is perverse.

… some at the FDA even suggested that for research purposes, death may be classified as a ‘minimal risk.’

A trail of destruction

The COVID-19 imbroglio is far from the first time that children — unable to provide their own informed consent — have been roped into medical experiments. In 2003, Vera Sharav of the Alliance for Human Research Protection (AHRP) described how the use of children and adolescents in “ever more speculative experiments” has frequently put youth “at risk of harm for profit,” particularly following passage in 1997 of the ironically named Better Pharmaceuticals for Children Act (part of the FDA Modernization Act). According to Sharav, the Act launched a “backdoor” and an industry-friendly reshaping of the very notions of “potential benefit” and “minimal risk,” effectively depriving children of more protective federal regulations and opening up widespread opportunities for children’s exploitation; some at the FDA even suggested “that for research purposes, death may be classified as a ‘minimal risk.'” When Sharav served on the Children’s Workgroup of the National Human Research Protection Advisory Committee, she was the sole committee member to object to the increased use of children in high-risk medical experiments.

Sharav’s website includes many examples illustrating the sordid underbelly of global and domestic childhood vaccine programs. In fact, it is hard not to construe the entire zero-liability childhood vaccination program as a mass experiment — one that willingly exposes children to risk in exchange for profit. U.S. children receive dozens of doses of vaccines that have never been evaluated in combination, nor tested against an inert placebo, nor meaningfully assessed for individual or synergistic toxicity, nor compared against protective health measures used by unvaccinated children. Unfortunately, lack of awareness and the widespread failure to report vaccine adverse events have allowed the damage caused by this ongoing experiment to remain invisible to many. On the other hand, some vaccines have produced such disastrous outcomes that the devastation has been impossible to ignore. To cite only a handful of U.S. examples:

… about half of U.S. adults are leery of COVID-19 vaccination, with 70% of potential refusers saying that they are concerned about safety.

A line in the sand?

Will American parents finally draw a line in the sand with COVID-19 vaccines? Currently, about half of U.S. adults are leery of COVID-19 vaccination, with 70% of potential refusers saying that they are concerned about safety. Could this be because over half of all American children now live with at least one chronic illness, and their beleaguered families have learned the hard way that vaccines are a major contributor?

Some American parents may also know enough to read between the lines of recent upbeat press releases about COVID-19 vaccines. In the case of the experimental Oxford vaccine that researchers now want to rush into young children’s bodies, AstraZeneca’s CEO has chosen not to dwell on the fact that the vaccine resulted in across-the-board illness in monkeys. Instead, unable to restrain his excitement about the infusion of over a billion in HHS cash, he describes the accelerated vaccine development process as “a fantastic experience” and proclaims, “I’ve never seen anything move that fast.” Meanwhile, vigilant parents may also have noticed that the headline-grabbing Moderna vaccine just produced severe illness in four out of 45 participants (9%). One of these, a 29-year-old, described feeling “more sick than he ever has before”; fainting after an urgent care visit, “his girlfriend caught him and kept his head from hitting the floor.”

Vera Sharav noted back in 2003 that the pharmaceutical industry enjoys higher profit margins and “greater government protections, subsidies, and tax incentives than any other industry,” and these remarks ring all the more true in the COVID-19 era. For example, early on when only 11 Americans had been confirmed to have the illness — February 4th — HHS was already hastening to assure would-be vaccine manufacturers that they would have full protection from liability. Is it any wonder that by early April, 115 COVID-19 vaccines had entered the pipeline or that the U.S. government had given the pharmaceutical industry the green light to “profit handsomely” from the government’s lavish public investments? Laying the legal groundwork for these guaranteed profits, a soon-to-be-published commentary in the Journal of Law and the Biosciences includes this chilling statement:

[D]epending on the features of the vaccine, there may be good ethical grounds to mandate a COVID-19 vaccine, as long as the risk is low, and access is readily available. Our jurisprudence suggests states will face few, if any, legal barriers in doing so, and the past political fights brought on by anti-vaccination groups are likely to be significantly weakened by the unparaled [sic] intensity of the COVID-19 crisis.

The caveat in the preceding quote — “as long as the risk is low” — is unlikely to figure prominently in PR efforts designed to persuade parents to sign their children over to COVID-19 vaccine trials and mandates. Regarding the former, parents would do well to heed Sharav’s conclusions about experiments involving children: The primary beneficiaries are not the children but rather the pharmaceutical industry and its “partners in academia.” Although vaccine scientists like to take advantage of parents’ altruism by telling them that their children’s participation in vaccine trials is “necessary” and “important for public health,” Sharav’s research clearly indicates that “Children, even more than adults, have endured severe adverse effects in clinical trials.”