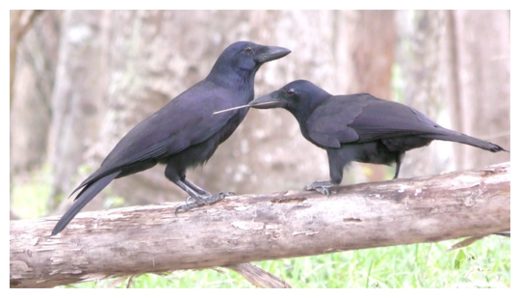 © Natalie Uomini
A juvenile wild New Caledonian crow (right) using a tool to probe together with a tolerant adult.

Humans are not the only species that enjoy prolonged childhoods: elephants, whales, dolphins and some bats and birds do also.

Is this what makes us smart? And if so, how important are long-suffering parents?

Exploring this with corvids – songbirds that hang around their parents in and out of the nest and have large brains relative to body size – researchers found those that spent more time with parents learned faster and lived longer.

How intelligence developed has long fascinated evolutionary scientists, with several theories such as brain-to-body size ratio. But, considering large brains take a long time to grow, not many theories have given due credit to parents for shaping their offspring’s cognitive development.

Michael Griesser, from the University of Konstanz, Germany, recognised there must be an evolutionary perk to extended parenting.

“Brains are weird adaptations – they come empty and are very costly,” he says. “So it takes individuals a lot of time to make this adaptation worthwhile.

“The problem of most studies looking into this is that they are very focussed on the outcomes of having a large brain but overlook the issue of having them until brains make up for their cost. That’s where the extended parenting comes in.”

It can’t just be nepotism that benefits children, as they still need to leave the nest and become independent at some point, so Griesser realised skill learning had to be involved, facilitating cognitive development.

Corvids are an ideal species to test the extended parenting theory; as well as long childhoods, their cognitive skills have evolved in a similar way to apes and humans, leading to cultural variation, and have been linked to greater neuron density. 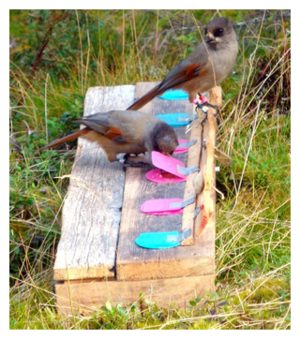 The scientists combined results from their prior fieldwork with two corvid species – Siberian jays and New Caledonian crows – with published studies of 127 corvid and several thousand other songbird (passerine) species.

The field work involved years observing the jays and crows in the wild to understand how young birds’ learning is related to their parenting during adolescence and survival in adulthood.

In Sweden, they conducted field experiments with young Siberian jays (Perisoreus infaustus), who live for up to four years with family groups.

Testing the young birds’ ability to learn critical life skills – recognising a dangerous predator and opening a puzzle box to get food – they found that those who hung around longer learned faster by watching their parents and received more food from them.

They were also more likely to live longer and start their own family.

Watching crows (Corvus moneduloides) in New Caledonia, the researchers tracked how juveniles learn to make tools for retrieving food – a skill that takes about a year to learn, which is a costly time investment for parents.

They found that the crows can stay for up to three years with their parents, who are very tolerant of their young, allowing them to watch closely when they retrieved food and even to steal the tools.

Accordingly, New Caledonian crows have the largest relative brain size of all corvids and superior problem solving and reasoning skills.

Put in context with the larger body of studies supported the central role of extended parenting for developing cognitive abilities through learning, with relevance for humans.

“Moreover, corvids and humans have the ability for lifelong learning – a flexible kind of intelligence which allows individuals to adapt to changing environments throughout their lifetime.”

They conclude that “extended family life is crucial to provide the social learning opportunities where juveniles acquire vital skills,” in turn facilitating “the evolution of flexible and expanded cognitive skillsets across species”.

Whether it took the juvenile birds as long as human teens to appreciate their parents is another matter.

The study is published in the journal Philosophical Transactions of the Royal Society B.