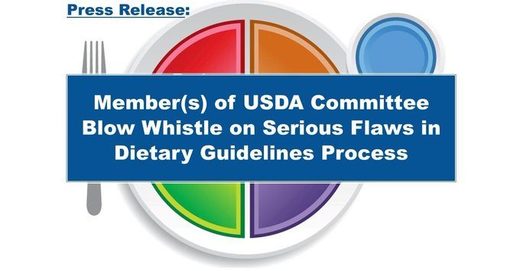 The Nutrition Coalition, a group that aims to bring rigorous science to nutrition policy, today released a letter detailing allegations suggesting there is a serious threat to the integrity and trustworthiness of our nation’s federal nutrition policy. The allegations were made by one or more members of the Dietary Guidelines Advisory Committee (DGAC), a powerful group of experts under the direction of the U.S. Departments of Agriculture and Health and Human Services (USDA-HHS). The letter expresses concerns about the Committee’s process and in particular, its review of the scientific studies underpinning what will be the next iteration of the Dietary Guidelines for Americans (DGA), due out at the end of this year. In light of these revelations, the Nutrition Coalition is calling for the expert report by the Dietary Guidelines Advisory Committee to be delayed to ensure adequate time for a thorough investigation of these allegations.

“The American people deserve trustworthy nutrition policy based on a comprehensive review of the most rigorous science, especially during this public health crisis when diet-related chronic diseases are among the leading risk factors for worsened outcomes from Covid-19,” stated Nina Teicholz, Executive Director of the Nutrition Coalition. “These allegations range from deleting scientific reviews without public notice to failing to adopt reforms mandated by the National Academies of Sciences, Engineering, and Medicine (NASEM). The NASEM identified numerous ways that the DGA needs to be reformed in order to ensure a scientifically rigorous process and, in their words, for this policy to be ‘trustworthy.'”

“With 60 percent of Americans diagnosed with one or more chronic illness, the guidelines have self-evidently been unable to flatten the curve on the rates of these diet-related diseases. Given that data across countries show that people with these diseases affected by Covid-19 have higher rates of hospitalizations and critical care, the need for nutrition policy that is effective and trustworthy is all the more important. This means the member(s) who are blowing the whistle and exposing potentially serious flaws should be taken all the more seriously by USDA-HHS. The federal government cannot ignore these allegations and should delay publication of the DGAC expert report to address and potentially remediate them,” said Teicholz.

One or more the member(s) from inside the DGAC has come forward with allegations reflecting a process that continues to be flawed. These concerns include.

Read the full list in the letter to USDA-HHS.

In 2015, following a hearing on the DGA process by the House Committee on Agriculture, Congress mandated that the National Academies of Science, Engineering, and Medicine (NASEM) review the DGA process. NASEM’s 2017 reviews comprised the first-ever outside peer review of the DGA and cost taxpayers approximately one million dollars.

NASEM’s report on the process stated, “to develop a trustworthy DGA, the process needs to be redesigned.” The report identified a series of recommendations intended to strengthen the scientific integrity of the DGA process, including measures to enhance transparency, manage biases and conflicts of interest, and most importantly, to ensure a rigorous scientific review process. However, in 2019, USDA stated that due to “time and resource constraints” it would not adopt many of the NASEM’s recommendations.

“Without critical reforms, this policy is on track to do virtually nothing to reverse the epidemics of disease that are causing enormous suffering,” said Teicholz.

The Dietary Guidelines for Americans have far-reaching influence. Prescribed by many doctors and dieticians as well as guiding the USDA’s feeding assistance programs, they are possibly the most powerful lever on America’s ideas about healthy eating. The Guidelines are issued only once every five years, and the 2020 iteration is well underway with the scientific report due out in the coming weeks.