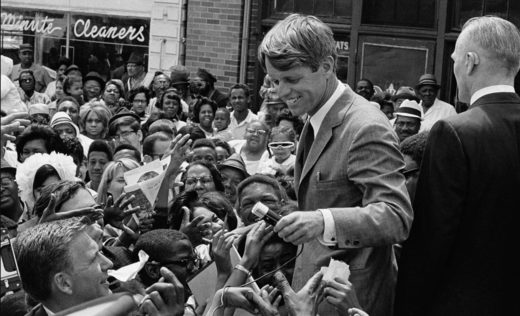 Today’s fires which have spread across America in the wake of George Floyd’s murder at the knee of Minnesota police officer Derick Chauvin has presented America with the chance to do some serious soul-searching. It has also presented certain Deep State opportunists, color revolutionaries and anarchism-financing billionaires a chance to unleash what some are calling an “America’s Maidan” in the hopes of accomplishing what four years of Russiagate failed to do.

The fact that these riots have occurred at a moment when America finds itself seriously reviving the spirit of JFK’s space vision is an irony that in many ways parallels the earlier “pregnant moment” of 1968. (In case you are not aware, NASA has officially revived manned space launches on May 28 for the first time since Obama killed the Saturn rocket program in 2011, establishing a new program to return to the Moon before going to Mars under the Artemis Program established in 2017. The Artemis Accords of May 15 lay out the framework for international cooperation in space closely dovetailing similar commitments made by Russia and China).

In 1968, the seeds of two opposing futures clashed for dominance in America and the world more broadly. On the one hand, humanity landed for the first time upon another celestial body and great hopes for a space-based economic system were felt by the entire world, while on the other hand race riots gripped America while an insane war in Vietnam was taking on a new anthrax-filled life ultimately killing over 50,000 young Americans and millions of Vietnamese. In this dystopian nightmare, endless sums of money were absorbed into the American Military Industrial Complex that John Kennedy, Martin Luther King and Robert Kennedy had died resisting.

Faced with these two futures, the citizens of 1968 chose poorly, and acquiesced to be put onto a path of insanity as Martin Luther King’s Civil Rights Movement became replaced by FBI-funded radicals under Cointel Pro, America’s space program was atrophied with Apollo’s moon program being killed in 1973 and the Vietnam war destroyed the last remnants of patriotism in the hearts of young moral Americans.

Fortunately, the study of the past affords us more than simply reasons to be depressed by stories of assassination and failure.

Along with a proper sense of history come the insights needed to prevent tragic choices and impulses from repeating themselves into the future, and with this fact in mind, it is important to observe the life of a particular non-tragic personality in America who overcame his fears in order to take to the stage of history, when others would not, during a time of great crisis: Senator Robert Kennedy (aka: The Man Who Should Have Been President), whose anniversary of assassination on June 5, 1968 is upon us.

Robert Kennedy as a Force in World History

While serving as Attorney General – first under the leadership of his brother John, then under Lyndon Johnson (until 1965) – Robert Kennedy’s life was always defined by a strong commitment to peace, development and cooperation, with justice for all races.

Exemplifying his intention to bring people into the process of historical change, Robert spoke to crowds in Apartheid South Africa in 1961 (after the ruling government refused to meet him), saying:

“Few have the greatness to bend history itself, but each of us can work to change a small portion of events, and in the total of all those acts will be written the history of this generation. … It is from numberless acts of courage and belief such as these that human history is shaped. Each time a man stands up for an ideal, or acts to improve the lot of others, or strikes out against injustice, he sends forth a tiny ripple of hope, and crossing each other from a million different centers of energy and daring, those ripples build a current which can sweep down the mightiest walls of oppression and resistance.”

After quitting his job as Attorney General in 1965 in order to become a senator and later presidential candidate, Kennedy focused his energy on reviving his brother’s Peace Corps, attacking the growing war in Vietnam, opposing racism at home and ending the despair of ghetto poverty that no one wished to look at.

In the midst of the July 1967 Detroit riots that resulted in 43 dead, 1,189 injured and 2,000 buildings destroyed, Robert was asked what he would do if he were president. In response, RFK said that he would force the media to show all of America what life is really like in the ghettos:

“Let them show the sound, the feel, the hopelessness, and what it’s like to think you’ll never get out. Show a black teenager, told by some radio jingle to stay in school, looking at his older brother – who stayed in school who is out of a job. Show the Mafia pushing narcotics; put a candid camera team in a ghetto school and watch what a rotten system of education it really is. Film a mother staying up all night to keep the rats from her baby… Then ask people to watch it… and experience what it was like to live in the most affluent society in history – without hope.”

Later that Summer, Martin Luther King and Bobby began a close collaboration, with Martin telling his associates that the Civil Rights Movement would put its full support behind Bobby in the run up to the 1968 elections. Bobby had earlier intervened into Martin Luther King’s October 1960 arrest in Atlanta for the crime of driving with an invalid license in racist territory. Both leaders advanced civil rights on their respective paths during the next few years but their peak collaboration only began during the summer of 1967 as both men made their resistance to the war in Vietnam known publicly.

In an interview on Face The Nation in November 1967, Bobby Kennedy gave a lesson to Americans that could have applied as easily to today’s regime change-crazed America, asking rhetorically:

“Do we have the right in the United States to say we’re going to kill tens of thousands of people, make millions of people, as we have… refugees, kill women and children? I very seriously question whether we have that right… Those of us who stay in the United States, we must feel it when we use napalm, when a village is destroyed and civilians are killed. This is our responsibility.”

Martin Luther King’s untimely death on April 4, 1968 resulted in a new wave of urban race riots that took America by storm, sweeping through 120 cities and resulting in 39 deaths (mostly black) and 2,600 injured. Over 75,000 troops were deployed to the streets of America during this time of tension.

Bobby Kennedy was on a plane to a presidential campaign rally in Indianapolis when he received news of King’s murder and was advised by both the Indianapolis police chief and his own staff to cancel the rally for his own safety. Not only did RFK not listen to this advice, but the statesman went straight into the ghettos of Indianapolis, stood on a flatbed truck and gave a speech to thousands of poor, broken hearted Americans who sat on a razors edge, as he delivered the news of King’s death. Choosing to stand with the people totally unprotected, Robert’s words held such potent love and empathy that they cut through the anger and rage of the mob resulting in a miracle as Indianapolis became the only major city in which no riots occurred. If you have not yet listened to this speech, take the 6 minutes to do so now.

“I was so despondent and frustrated at King’s death, I had to seriously ask myself – can this country be saved? I guess the thing that kept us going was that maybe Bobby Kennedy would come up with some answers for the country… I remember telling him he had a chance to be a prophet. But prophets get shot.”

Indeed, just one day after his victory of the democratic primaries in California on June 5, 1968, Bobby Kennedy was shot and killed at the Ambassador hotel in Los Angeles. Although a young Palestinian man named Sirhan Sirhan was made the lone scapegoat, mountains of evidence accumulated over the years has pointed to a much darker story. Such evidence includes the findings of RFK’s coroner, who proved that the killing bullet entered not from the front but rather at close range from the back of the neck.

Today’s world desperately needs citizens and statesmen with the wisdom of such figures as Martin Luther King Jr and Robert Kennedy if a similar tragedy is to not unfold again today as it did in 1968. In those days, covert intelligence operations transplanted King’s Civil Rights movement with its effective use of civil yet peaceful disobedience, with the “New Left”, featuring armed and violence-prone operatives running bomb-creating organizations like the Weather Underground that littered bombs (and STDs) across America. With the rise of the drug-loving anarchists of the new left, who would later become leading figures of today’s psychopathic establishment, a new ethic was created on the basis of equating all aspects of Western civilization (including the space program, atomic technology, the American Constitution and Western values more broadly) to be as evil as the war in Vietnam, corporate greed and the military industrial complex.

So here we are once more, standing on the precipice of a new age of cooperation, space exploration and international development, versus a Deep State-managed dystopian world order that would make Orwell turn in his grave. If even a modicum of the wisdom expressed by MLK, JFK or Bobby Kennedy is alive in the heart of Donald Trump, and a few other world leaders, then I would say the chance of a bright future for mankind is not lost.