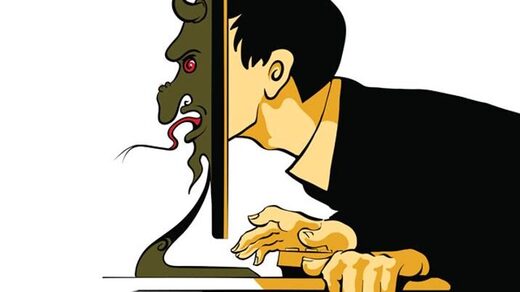 Disruption is reinforcing to trolls

Internet trolling can be thought of as a deliberate behaviour to produce conflict or distress, or both, by posting material that is discourteous, provocative, inflammatory, or intimidating. The prevalence of trolling behaviour is hard to estimate, but at least 1% of social media users have experienced this personally over the last year. This figure can be as high as 70%, depending on the study consulted, and the methods used to collect these data.

Trolling used to be conceptualised as an activity in which an individual was engaged, being targeted from one person usually to another; however, increasingly we are seeing a rise in what might be termed “societal trolling” — disruptive tactics targeted from one group to another, often in a political context.

The questions that arise are: Why is trolling done? Are the motivations the same in individual and societal trolling? Are there similarities between online trolling and mass-disruptive actions conducted in the real world?

There are many motivations for disruptive protest, including legitimate ones based on, for example, experienced oppression. However, do such potentially legitimate contexts of protest provide opportunities for others to engage in disruption for disruption’s sake, under the cover of mass anonymity; and are the motivations of these people similar to the online troll?

One study of political trolling found that a group with a known purpose to disrupt society would engage in both sides of any debate to polarise opinion and sow discontent. For example, the same organisation got involved in Twitter debates about the Black Lives Matter movement and the safety of vaccines, simultaneously supporting both sides of both debates. The tweets from the organisation were associated with particular accounts that fed into five broad categories: Right Troll, Left Troll, News Feed, Hashtag Gamer, and Fearmonger, employed to different ends.(1)

The evidence certainly suggests that trolling has moved beyond the individual, but are the underlying characteristics of “traditional” social media trolls, and the new breed of online political provocateurs, different? We should not assume that, just because somebody is political, they have different motivations than if they were non-political. To analyse the motivations, both the personality and the context need to be understood.

The troll was also able to predict, with alarming accuracy, what would emotionally hurt others, and felt none of their emotional experience (lack of empathy). The troll’s primary motivation was to cause, and enjoy, social mayhem.

A similar result was found in a study that pulled apart the characteristics of the psychopath, by assessing their “dark tetrad” traits(3). It was found that psychopathy and sadism predicted trolling, but narcissism and Machiavellianism did not. This study also found that “negative social potency” (being reinforced by causing disruption) was associated both with the dark tetrad personality traits, and with online trolling. Those seeking negative social potency enjoyed psychologically and emotionally harming others, and achieved this by exerting a negative social influence and power.

Such findings about personality traits replicate in the worlds of politics and political actions. Psychopathy and narcissism are associated with an interest in political matters (with narcissism also predicting a lack of knowledge about such matters). Both psychopathy and narcissism also predict engagement in politics: “Our results imply that individuals exhibiting higher levels of Narcissism are not only less knowledgeable but also more interested in politics and more likely to participate when given the opportunity.”(4) Apparently, these are quite widespread political traits, as another study(5) of a dataset of expert ratings of political candidates, competing across a large number of elections worldwide, found that around 25% of them could be termed “populists.” These individuals scored low on agreeableness, and (somewhat disturbingly) low on emotional stability and conscientiousness. Also disturbingly, the populists had high scores for narcissism, psychopathy, and Machiavellianism.

The personalities of online trolls, and those of some political activists, seem to be similar. The unanswered question is whether such political activists are not quite as committed to a particular viewpoint as they suggest, but are more committed to gaining the reinforcement that they need — which, if they are anything like the internet troll, is their joy in disrupting and distressing others.

The power of the context to allow this to occur can be seen in a further study of trolling(6). An experiment simulated an online discussion, and the number of trolling posts was noted as a product of the context. In addition to personality, both negative mood, and exposure to witnessing trolling posts from others, increased the chances that an individual would become a troll — experiencing both factors together doubled this probability. Suggesting that when many people are behaving badly together, and they are in a low mood requiring bolstering, the psychopath or sadist will use anonymity to inflict distress on others. In a further large study, people whose identities were strongly connected with a particular position implied that they would commit violence in support of their views, but only those people with a callous, and manipulative, personality actually did exhibit destructive behaviour(7).

This seems to be one of those rare areas where we know more about the motivations of the digital-world behaviour than we do of the real-world behaviour — online trolls are psychopathic and/or sadistic individuals, who like to inflict distress for their own ends (possibly because they are sad and low).

In the real world, political disruption offers the same contextual variables of anonymity, and exposure to a high number of examples of disruptive behaviour. We know that political trolls’ sole purpose is discord and division. We know many politicians have “dark” traits. But, we need to ask how many political agitators are motivated by the personal power and satisfaction that distressing others bring them — are they all trolls together?

7. Gøtzsche-Astrup, O. (2019). Partisanship and violent intentions in the United States.