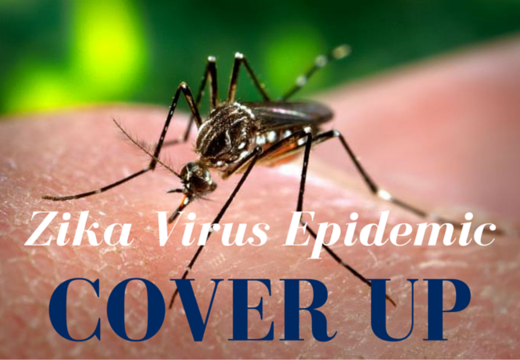 Correlation does not mean causation. Is the Zika virus being used as a scapegoat for Pharma’s dangerous adverse effects?

The world of modern medicine has since its inception been one of controversies, scandals and cover ups. Each such episode has bettered the other and is done with a finesse that appears clearly criminal in intent. The Zika virus episode is one of the best examples of this and hides a very cruel agenda behind it.

On February 1st 2016, the WHO declared the Zika virus epidemic a global public health emergency. This was even before it formally sat for a Skype meeting on February 2nd. What caused this urgency? The Zika virus, WHO claimed, had caused an epidemic of microcephaly in Brazilian children around 4000 of who had been affected since October 2015. Microcephaly is a condition where children are born with a small size of the skull and sometimes with under developed brains.

Experts cautioned that the virus was spreading fast and Latin America was threatened. Soon cases were reported from the USA, spread through sex, concretizing the official narrative on the “ferocious spread” of the virus. In the UK the public was reminded that the virus was only a plane ride away. Ireland advised condom use. Zika was also linked to a kind of paralysis called the Guillain Barre Syndrome, an auto-immune disorder where the body attacks its own nerve cells. The WHO put Zika in the same category as the Ebola; both belong to the same category of a virus family called Flavoviridae. The priority, it was said, was to protect pregnant women and babies from harm.

Even before this declaration by the WHO, on January 22nd the Government of Brazil had gone into an overdrive to contain the epidemic. The Health Minister requested women to avoid pregnancy, asked the pregnant women to report to doctors for a checkup, and employed 200,000 soldiers in a fumigation drive to kill mosquitoes. Pregnant women were heart broken in the country. Many considered aborting and some even went ahead and conducted illegal abortions, as abortions are not legal in the country. The media was flush with news and every TV channel and print media highlighted this global crisis. Experts suggested that genetically modified mosquitoes used against the dengue carrying mosquitoes in Brazil should also be used against Zika as the vector, the Aedes aegypti variety was the same.

In a public health debate on France 24 TV channel on 26th January however the experts were cautious. Through their body language and careful choice of words they opined that the epidemic was perhaps not so serious. Brazil was probably overreacting to the crisis as it was hosting the Olympics in August 2016 and also the Paralympics in September. Clearly it had to show action on the ground to prove that strong steps were being taken to curb the epidemic. As they became more and more uncomfortable dealing with the subject of the interview, the Zika virus, the anchor had to wonder if this was another swine flu scare that had led to vaccine stockpiling worldwide and that had to be destroyed later leading to huge losses to Governments and profits to the manufacturer. An expert then conceded that common sense measures at the point of origin were usually enough to contain the spread of vector borne diseases.

Even as the hysteria mounted and the Health Minister of India called an extraordinary meeting to discuss India’s response to the public health emergency and the WHO predicted a global disease burden of 4 million with outbreaks in 20 countries, crucial information began to emerge in the independent media that shocked well read and educated people throughout the world. There was something very wrong in the way the WHO, Governments, other medical agencies and the media was fanning the issue.

The Zika virus was discovered in the year 1947 by the Rockefeller Foundation when it was isolated from monkeys from the Zika forest in Uganda in a laboratory. Since then the Foundation owns the patent to this virus. The first human case being detected in the year 1954 was found to cause a very mild form of disease involving low fever, sore body, headaches, and a mild rash in very few people. The rest did not show any symptoms at all. The symptoms were resolved in a few days. Prior to 2007 only 14 cases were recorded. Even as a bigger spread was recorded in French Polynesia in 2014 (338 cases) nobody took the virus seriously. So what changed in 2015? Why did 4,180 babies come down with microcephaly in Brazil? What about the cases of Guillain Barre Syndrome? These were never associated with the Zika since its discovery almost 70 years ago.

Experts in the field of genetics observed something very curious. The Zika virus had currently emerge exactly from those areas where the GM mosquitoes were released in 2015 to contain the dengue! The mosquitoes were released by a company called Oxitech in collaboration with the Bill & Melinda Gates Foundation (BMGF). Could one virus have been replaced with another?

As Brazil started scrutinizing the 4,180 cases of microcephaly more surprises emerged. Alerted by a circular to report cases of microcephaly pediatricians in the country had clearly exceeded their brief by reporting every child that appeared to have small skulls. Having small skulls is not unusual in Brazil. As on February 4th only 404 of those cases were confirmed to be microcephaly. Worse, the Zika virus was found in only 17 of them! In other words, only 4.2% of microcephaly cases in Brazil have been shown to have any connection to Zika. That means 96% of microcephaly cases have no link to Zika. There was evidently no epidemic, and the role of the Zika virus is severely questioned. And yet the WHO went ahead with the global public health emergency declaration. Again, why?

What can cause microcephaly? According to medical texts, the condition can be genetic, fusing of bone sutures (gaps) in the skull preventing growth of the brain, due to complications in pregnancy or faulty delivery leading to deprivation of oxygen in the brain, exposure to drugs, alcohol or toxic chemicals in the womb, infections in the womb due to rubella or varicella viruses etc, severe malnutrition, inability of the body to break down a chemical, and any other insult or injury. Researchers than began investigating what could have happened to pregnant mothers during their pregnancy.

Brazil is a country that is reckless in the use of pesticides in its agricultural fields. Many of them are banned and are linked to congenital defects (defects to fetuses in the womb). Brazil also cultivates GM crops and uses the dangerous herbicide Glyphosate which has also been linked to birth defects in experiments with laboratory animals. Combined with rampant malnutrition in Brazilian women, pesticide and herbicide poisoning was a deadly mixture. The agency behind pushing GM crops into Brazil was once again the BMGF.

While investigating the procedures directed at pregnant women in the year 2015, shocking facts emerged. Acting as per a WHO decision to inject pregnant women with vaccines despite contraindications the Brazilian Government had allowed its pregnant women to become the equivalent of guinea pigs. Besides the tetanus vaccines (provided as Diptheria Tetanus vaccines), the women had also received the Measles Mumps Rubella (MMR) vaccine in pregnancy. What is worse a DTaP vaccine was mandated for pregnant women in 2014. Citing a shortage of the DTaP vaccine the highly reactive DTP vaccine was also administered. Clearly huge risks had been inflicted on the unsuspecting women. None of these vaccines are known to be safe during pregnancy and the MMR and the DaPT/DPT vaccines are lapses that cannot be condoned. The rubella virus in the MMR vaccine and the pertussis component in the DPT vaccine are known to cause microcephaly. In the USA alone, where the DaPT is administered to pregnant women, 25000 cases of microcephaly are likely to occur every year.

The DTaP vaccine initiative to vaccinate pregnant women was financed by BMGF funds. BMGF also heavily funds vaccination programmes in developing nations through its funded ally, the GAVI which receives the second largest funding from the BMGF. This BMGF is therefore coincidentally linked with all that could have gone wrong in the entire picture. The agency is also the third largest donor to the WHO which declared an emergency in great haste. If a vaccine to prevent Zika emerges, and GM mosquitoes are released globally to contain Zika, the gainer once again would be the BMGF. What an interconnected net of coincidence! If the GM mosquito, herbicides, pesticides and vaccines link to microcephaly in children can be covered up under the Zika protest, the beneficiary once again would be the BMGF which would not be questioned for its failings even as it continues to gain from these dangerous ventures.

In the future we can expect the Zika to be blamed for more and more conditions as the mere presence of the virus is being linked to illnesses and conditions in the patient. This is like blaming the firefighters present in the fire scene for the fire as they are present whenever there is a fire! Called ‘correlation does not mean causation’, this principle is not being applied here for obvious reasons. There have to be scapegoats for medicine’s dangerous adverse effects. It would be wonderful if those scapegoats can call for further interventions that result in more business and more profits. Already there is a call to legalize the banned DDT as a mosquito repellant.

Thus even before the emergency was declared, the truth was out. There is no epidemic. The Zika virus is not the culprit. There has been a cover up to crimes of immense proportion at ground zero. An entirely new market has been opened up for drug and vaccine manufactures and research agencies will receive enough funding to clinch a faulty link. There will be a vaccine for a probable vaccine induced disorder. Vaccination of pregnant women can continue throughout the globe with the blame being shifted to the Zika virus for adverse effects. Countries that object to abortions will be asked to frame laws to legalize them. Pregnant women will be frightened into abortions and to stay away from sex. Large scale vaccinations of adults will become mandatory opening up new markets as the childhood vaccination market is getting saturated.

Modern medicine has gained in this entire episode as it has once again been able to expand its markets, cover up its criminal pursuits, further its de-population agenda, and strengthen the fear of disease in populations. The common man has lost his family freedom and choices, health, and is now fearful of an imaginary enemy.

Jagannath Chatterjee is a vaccine researcher and author of a number of articles on the subject that have appeared in newspapers and journals in India. He also writes for websites. A campaigner of 30 years standing against vaccines he is a vaccine victim being affected severely by the MMR vaccine in 1979 when he was 17 and preparing for a career in medicine. He blogs at www.currenthealthscenario.blogspot.in