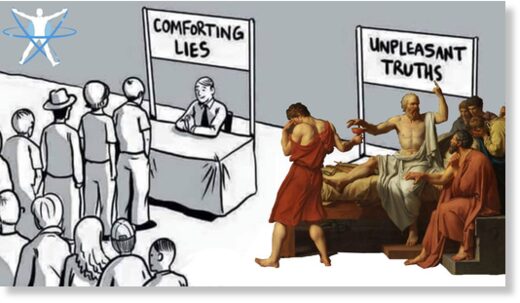 As the old adage goes, “The truth shall set you free.” But if that’s true then why do we quite often have such a difficult time of being honest with ourselves? And just as importantly, why do we struggle so much in being honest with others? Programmed or wired to deny that we have personal shortcomings – or fearing the consequences of honest communication about others’ failings – we quite often opt for the easy out, keeping things to ourselves and attempting to avoid the potential pain and discord that may come of telling it like it is. Like a festering wound, the lies we tell ourselves and accept from others infects the very quality and well being of our selves and the lives of those around us.

On this week’s MindMatters we discuss why one should have less fear of truthful communication – and a greater willingness to be honest. While there is always a risk of hurt, the uncertainty of misunderstanding, and the discomfort of vulnerability – what is easily overlooked is the greater meaning, understanding, and intimacy that may be added to one’s life and relationships – if we were only more honest (assuming the people around you share this value). At at time in human existence when we are struggling to make sense of complex and rapidly occurring world-changing events, how can we achieve a semblance of true understanding when, at square one, we are dishonest with ourselves and the souls immediately surrounding us?