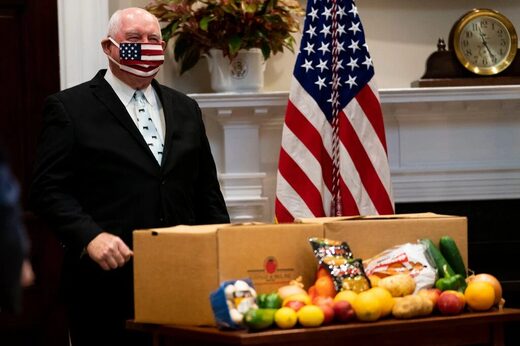 © Doug Mills/The New York Times
Sonny Perdue, the Agriculture Secretary, in the White House last month. Critics fear the panel’s recommendations could be discarded by agency staff who draw up the final guidelines.

Are children who consume prodigious amounts of sugary drinks at higher risk for cardiovascular disease?

Can a diet rich in fruits, vegetables and legumes reduce the risk of hip fractures in older adults?

Should sweetened yogurts be a part of a healthy diet for toddlers making their first foray into solid food?

These and other nutrition-related questions will be addressed on Wednesday when a panel of 20 nutrition scientists, meeting publicly by videoconference, discusses suggested changes to the federal government’s Dietary Guidelines for Americans, recommendations that directly impact the eating habits of millions of people through food stamp policies, school lunch menus and the product formulations embraced by food manufacturers.

The guidelines, updated every five years by the Department of Agriculture and Department of Health and Human Services, have long prompted jousting among nutrition advocates and food industry interests, like pork producers and soda companies, seeking to influence the final document. But the process this year is especially fraught, given the Trump administration’s skepticism of science and its well-established deference to corporate interests.

More than half of this year’s panel has ties to the food industry, and the scientists leading newly created subcommittees on pregnant women, lactating mothers and toddlers have ties to the baby food industry.

Some groups have criticized federal officials for omitting questions about red meat and salt consumption from the 80 diet-related questions that panel members were charged with answering. And government watchdog groups have questioned the panel’s objectivity.

“Amid a pandemic made worse by diet-related disease that’s hitting black and Indigenous communities hardest, junk food corporations should be paying for their abuses, not stacking scientific panels and official drafting committees,” said Ashka Naik, the research director at the advocacy group Corporate Accountability.

In a statement, the Department of Agriculture said panel members were nominated by the public and that those chosen were required to submit financial disclosure forms that were reviewed by agency staff members for possible conflicts of interest. The entire process, it noted, has garnered 62,000 public comments.

“Throughout the entire 2020-2025 dietary guidelines process, we have relied on the nation’s leading scientists and dietary experts to inform our development of science-based guidelines and have taken numerous steps to promote transparency, integrity, and public involvement,” Pam Miller, the agency’s Food and Nutrition Service Administrator, said in the statement.

The final guidelines, scheduled for release later this year, shape federal food programs in schools, prisons and military bases that sustain one in four Americans.

The coronavirus pandemic has fueled a greater sense of urgency over the guidelines, given emerging research suggesting that people with diet-related illnesses like Type 2 diabetes, hypertension and cardiovascular disease have a significantly higher risk of developing serious complications from Covid-19.

Such diseases, like Covid-19 itself, have struck African-American and Hispanic communities particularly hard. The members of the nutrition panel, however, are almost all white.

“People of color are already disproportionately impacted by chronic diseases but Covid-19 has really placed a magnifying glass on the health disparities that make us more vulnerable to the pandemic,” said Dr. Yolandra Hancock, a pediatrician and obesity expert at George Washington University’s Milken Institute of Public Health. “My concern is that these guidelines, heavily influenced by the food and beverage industry, will dictate what kinds of food are offered at schools and set the eating habits of children, particularly black and brown children, for the rest of their lives.”

Although the federal government has expanded the size of the scientific advisory panel, increased opportunities for public input and sought to introduce greater transparency into the workings of the panel by livestreaming its meetings, a wide array of critics has been attacking this year’s process as deeply flawed.

One reason is the panel’s recommendations are ultimately suggestions that can be discarded by agency staff who draw up the guidelines. Agriculture Secretary Sonny Perdue, who spent much of his career in the agribusiness sector, has the ultimate say over the final content.

“Once the advisory panel makes their recommendation, it goes into a black box, where there is the potential for undue political influence,” said Sarah Reinhardt, a health analyst at the Union of Concerned Scientists.

The fears that politics could overshadow science are not entirely unfounded. In 2018, Secretary Perdue sought to ease Obama-era nutrition standards for sodium and whole grains in school lunch programs, a move that infuriated nutritionist experts. In April, a federal judge struck down those roll backs, saying they violated Congressional procedures for creating new regulations. In 2017, Mr. Perdue, citing the need for improved customer service, merged two federal nutrition programs, a move health advocates said would compromise the agency’s scientific integrity and harm efforts to address the nation’s crisis of diet-related illnesses.

President Trump, who regularly broadcasts his fondness for fast food, has shown little interest in the nation’s nutritional well being.

Complaints about industry influence did not begin with the Trump administration. Many nutrition experts were disappointed with the 2015 guidelines issued during the Obama administration, which did not explicitly urge Americans to eat less meat and eliminated longstanding limits on dietary cholesterol, changes that pleased the nation’s egg and beef producers.

Then there was the issue of sustainability. The panel that year had for the first time addressed the impact of American eating habits on climate change and the environment, but the section was omitted from the final report following an outcry from the livestock industry unhappy over the panel’s suggestion that a plant-based diet was both healthier and more sustainable.

This year, federal officials excised any discussion of sustainability.

“This year’s committee has really been hamstrung from the beginning,” said Stephanie Feldstein, the population and sustainability director at the Center for Biological Diversity.

Jessi Silverman, a policy associate at the Center for Science in the Public Interest, said she was especially concerned with draft comments from the panel suggesting there was limited evidence about the role of sugary beverages in weight gain. “We think that the evidence is strong,” she said. “We don’t want to see any weakening of the advice around added sugars and sugary beverages.”

Nina Teicholz, executive director of The Nutrition Coalition, who has championed the health benefits of diets low in carbohydrates and high in fat, said the panel had largely overlooked recent studies, some of them controversial, that question longstanding admonitions against consuming excess saturated fats.

She said she feared the agency would continue to promote patterns of eating that are overly reliant on grains and other carbohydrates.

“It’s pretty self evident that the guidelines have done nothing to prevent our country’s epidemics of obesity and diabetes,” she said.

Then there is the matter of conflicts of interest. More than half the advisory panel members this year have ties to the International Life Sciences Institute, an industry group largely supported by agribusiness, food and pharmaceutical companies. The group, created by a Coca-Cola executive four decades ago, has long been accused by the World Health Organization and others of trying to undermine public health recommendations to advance the interests of its corporate members.

In a report issued in April, Corporate Accountability noted that the two newly created subcommittees considering dietary issues for pregnant and lactating women and children under 24 months were led by scientists who have worked for Danone, Gerber and other makers of toddler food products.

Marion Nestle, a nutrition expert at New York University who served on the advisory panel in 1995, said the large number of experts with industry ties reflected the dearth of public funding for nutrition science, which forces many researchers to accept funding from food companies and industry associations. “Anyone who thinks it’s not OK to accept corporate money would never get appointed to that committee,” she said. “That’s considered so biased that you’re too biased to function.”

Despite concerns about this year’s process, Ms. Nestle said she believed the new guidelines would likely resemble the recommendations that were issued five years ago. The bigger issue, she said, is that most Americans will find the guidelines hard to decipher and unsure how to apply them to their own eating habits.

“Every five years, the guidelines get longer and more complicated,” she said. “In my view, the advice is the same: Eat your vegetables don’t gain too much weight and avoid junk foods with a lot of salt, sugar and saturated fat.”

Andrew Jacobs is a health and science reporter, based in New York. He previously reported from Beijing and Brazil and had stints as a metro reporter, Styles writer and national correspondent, covering the American South. @AndrewJacobsNYT