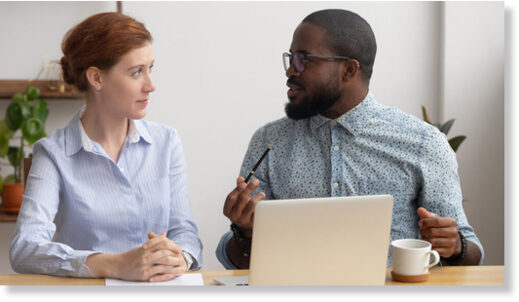 The idea that all white people are unconsciously racist and need training to correct this has gained momentum. But doesn’t this colonisation of thought processes take us into dangerous territory?

These days we are told that, unless you can prove otherwise, you are presumed to be a racist. This is why Labour Party leader Sir Keir Starmer announced that he was going to introduce unconscious bias training for all the officials in his party.

And just to demonstrate that he meant business, Starmer declared, “I’m going to lead from the top on this and do that training first.” No doubt Harry and Meghan – otherwise known as the Prince and Princess of Sussex – would approve of Starmer’s actions. Not long ago, the royal couple gave a little sermon about the need to uncover your unconscious bias to a carefully selected ‘discussion group’.

Meghan explained that your upbringing can shape your unconscious bias and that this is where “racism… lies and thrives.” Harry added that “once you start to realize that there is bias there, then you need to acknowledge it, you need to do the work to become more aware“. Harry concluded his lecture with a word of hope: “Unconscious bias must be acknowledged without blame to create a better world for all of you.”

Undertaking ‘unconscious bias training’ has become a therapy of salvation widely promoted by leading members of the Anglo-American establishment. At dinner tables, members of the elite now exchange pleasantries about how they managed to get trained out of their bias.

The assumption that all white people are unconsciously biased and at the very least unwittingly racist is continually promoted in the Anglo-American media and institutions of education. That is why institutions in both the private and public sectors are now offering mandatory unconscious bias training for their people. In many cases, you have no choice but to attend one of these re-education programmes.

In many instances – especially in universities – compulsory unconscious bias training is promoted on an industrial scale. Professor Edward Peck, the Vice Chancellor of Nottingham Trent University, recently stated that his institution is “considering” introducing compulsory modules in “unconscious bias and white privilege” for all students and staff.

A while back, lecturers at York St John University were instructed to attend workshops to “understand their white privilege” and examine how their “whiteness” makes them unwittingly racist.

Since the eruption of the recent wave of Black Lives Matter protests, the necessity for acknowledging and coming to terms with ‘unwitting racism’ has acquired the status of religious duty.

The concept of unwitting racism implies that you may be a racist even if you think that you are not. From this standpoint, racism is interpreted as a hidden disease that can only be detected by an experienced race expert. “It’s possible to be racist without realising it,” claims a commentator on the subject, before providing information on “how to catch your own bias.”

The focus on unconscious bias and unwitting emotions transforms the meaning of racism into a psychological problem. Once upon a time it was easy to recognise racism. Racism worked through acts of conscious oppression and violence, organised discrimination and the use of demeaning language. Racism was interpreted as a public experience of oppression rather than as a hidden emotion that needed to be revealed through the expertise of a bias trainer.

The redefinition of racism from an act of conscious oppression to a problem of the mind was boosted by the former British High Court Judge William Macpherson’s 1999 report on institutional racism.

In his definition of institutional racism, Macpherson declared that it “can be seen or detected in processes, attitudes and behaviour which amount to discrimination through unwitting prejudice, ignorance, thoughtlessness and racial stereotyping which disadvantage minority ethnic people.” The key word here is ‘unwitting’ – an unconscious response driven by unspecific emotions. The idea that people could be racists unwittingly means that literally anyone could be a racist, whether they knew it or not.

If racism can be unwitting, who decides whether or not an individual is guilty as charged? Typically, the answer is that it is the accuser. The complexity of psychological motivation was resolved by Macpherson in the following terms: “A racist incident is any incident which is perceived to be racist by the victim or any other person.”

So what counts is not the act, but how it is perceived. The principle that an offence is in the eyes of the beholder lends the charge of racism a highly subjective character. Such a subjective standard of proof lends the accusation of racism automatic credibility.

But shouldn’t we be more concerned about what we do, rather than what we – unconsciously – think? This new and sustained focus on the unconscious by the so-called ‘race experts’ who perform the bias training essentially represents the colonisation of people’s internal thought processes.

And if we continue down this path, brainwashing will become legitimate policy.

Frank Furedi is an author and social commentator. He is an emeritus professor of sociology at the University of Kent in Canterbury. Author of How Fear Works: The Culture of Fear in the 21st Century. Follow him on Twitter @Furedibyte