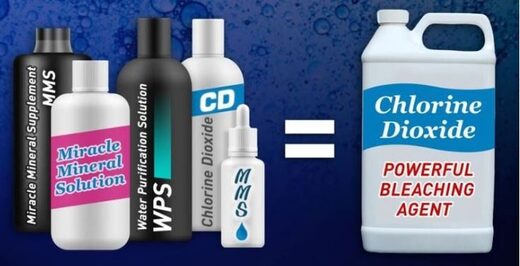 Federal agents in hazmat suits raided a church in Florida, and confiscated 22 gallons of a toxic concoction the church was marketing as a cure for Covid-19. The ‘Miracle Mineral Solution’ is in fact a potent industrial bleach.

Agents raided the church on Wednesday, making off with a sizable haul of industrial chemicals. According to ABC7 News, local and federal crews found 50 gallons of muriatic acid and 8,300 pounds of sodium chloride, as well as 22 gallons of the finished ‘Miracle Mineral Solution’ (MMS).

The raid followed a Food and Drug Administration injunction against the church in April, which ordered its website to be taken down and its supplies of the “dangerous and potentially life threatening” liquid destroyed.

The Genesis II Church of Health and Healing is not a church in the traditional sense. Instead it functions as an international organization dedicated to the manufacture and sale of MMS, also known as ‘Miracle Mineral Supplement’ or ‘Master Mineral Solution’. The church solicits donations from its customers, offering them the corrosive “sacrament” in return, which it claims can cure Covid-19.

Training courses, which instruct believers in the administration of MMS, also help the church turn a tidy profit, as do its membership cards, which supposedly offer the congregation exemption from “vaccinations, medications, X-rays, scans, [and] implants.”

Desperate people around the world have turned to MMS to fight the coronavirus. As early as January, when less than ten cases had been confirmed in the US, YouTube personality Jordan Sather emerged as an early proponent of the chemical cocktail, calling it the only effective treatment against the “bio-engineered” virus. Since then, customers as far afield as New Zealand and Australia have bought the church’s snake oil.

MMS was not invented as a coronavirus treatment. First marketed by gold miner and former Scientologist Jim Humble in 1996, it’s risen to infamy in the years since, with its promises seducing even some in the medical establishment. These include Northern Irish doctor Finbar Magee, who had his license revoked in 2016 for administering it to an autistic child.

Its proponents, however, usually come from anti-vaccine and hippy circles. They tout it as a cure-all treatment for AIDS, cancer, autism, brain damage, and nearly 150 other maladies listed on the church’s website. In fact, consumption of its ingredients has been linked to brain and reproductive damage by the US Environmental Protection Agency, and the mixture has been shown to rust steel even at low concentrations.

Following Wednesday’s raid, the Genesis II Church has been asked to reach out to its customers and tell them to destroy their own MMS supplies. Church head Mark Grenon and his two sons, Jonathan and Joseph, will appear in court in Miami to face charges of conspiracy to defraud the United States, conspiracy to violate the Federal Food, Drug and Cosmetic Act, and criminal contempt, CBS Miami reported.