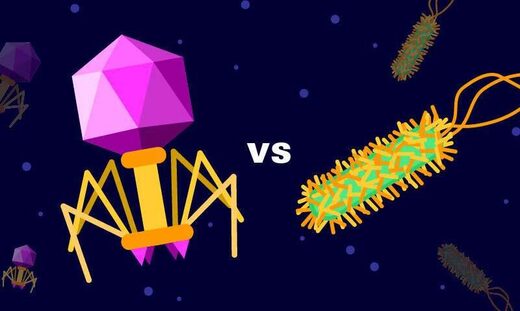 The adage ‘all things in moderation’ applies not to just to food and drink, but also to the legions of bacteria inside our guts helping us digest that food and drink. It turns out the rule may also extend to the lesser understood bacteriophages, which are viruses that infect the bacteria living inside us.

“We’re appreciating more and more that the most abundant microbial entities in the human gut are actually viruses,” says Eric Martens, Ph.D., associate professor of microbiology and immunology at the University of Michigan’s Medical School.

His team has been exploring the puzzling way bacteria and their viruses appear to coexist inside the human gut. The secret may lie in a hairy-looking sugar coating bacteria used to defend not only against attacks from the human immune system, but also from various viruses seeking a way in.

Using a common gut bacteria Bacteroides thetaiotaomicron, or BT for short, Martens’ team began to look at the complex interaction between BT and viruses, by pitting them against each other in the lab.

When challenged with viruses, or phages, collected from waste water, some of the bacteria were able to resist infection while some were not. “When a particular phage comes along that can kill certain members of the population, it does so and the resistant bacteria quickly grow out,” says Martens.

However, instead of permanently altering the receptor that allowed the viral penetration, and potentially harming itself, some of the bacteria temporarily turn on a resistant state through a reversible process called a phase variation. But some of members of the bacterial population, unaware of the phage’s continued presence, turn off this resistance switch, leaving them susceptible to infection…and on and on.

The team genetically engineered the BT strain to express just one of eight chemically-distinct capsules and a version with no coating at all. In all cases, infection could be blocked by some, but not all, of the capsules. Surprisingly, the researchers noted that the bald bacteria were also able to evade infection. “We were intrigued to see we could take away all of the capsules and still infect it with these phages and the bacteria could still survive, which necessitates that they have a backup mechanism in place,” Martens says.

The interplay between the gut microbiome and their phages could have implications for human disease. “One of our hypotheses is that individuals carry different types of viral loads in their guts. Some could be more or less immunogenic, interacting with our immune system to cause inflammation. But they also might modify the physiology of the bacteria that are there by forcing them to express certain functions/capsules that we also know interact with the immune system,” says Martens.

He says the study helps explain this age old observation that these bacteria coexist with their viruses. Notes Martens, “Neither side necessarily wins out over the other.” As such, bacterial viruses could offer a way of beneficially altering the gut microbiome for the treatment of disease.