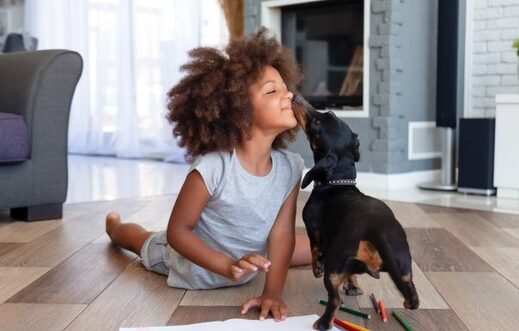 There’s no doubt that dogs can bring a whole lot of joy to a household. Our canine companions are loyal, caring, and offer unconditional love to every member of the family. Now, an interesting new study finds that a pet dog may also offer improved social and emotional well-being for children.

In a nutshell, the study concludes that young children living with at least one dog at home display far stronger emotional and social development than kids with no pups at home.

The research, conducted at the University of Western Australia in collaboration with the Telethon Kids Institute, includes 1,646 households (42%, or 686, of which own a dog) with at least one child between the ages of two and five. Each family was given a questionnaire to fill out.

To start, a number of additional factors were considered for each child, including age, gender, sleep routine, parents’ education, and usual daily screen time. Using this data, researchers say that kids with a pet dog were 23% less likely to have problems with their emotions or social interactions with others than children with no dog at home.

Kids from a dog-owning household were also 30% less likely to act in an anti-social manner and 40% less likely to have trouble hanging out with other kids. Children with dogs are also 34% more likely to be considerate toward others (sharing, politeness).

“While we expected that dog ownership would provide some benefits for young children’s wellbeing, we were surprised that the mere presence of a family dog was associated with many positive behaviors and emotions,” says corresponding author & associate professor Hayley Christian in a release.

Spending time with their dog appears to strengthen these benefits for children. Kids who reported going for a family dog walk at least once per week were determined to be 36% less likely to have below average emotional or social development in comparison to kids who rarely went for walks with their dog. Moreover, kids who said they play with their pet dog at least three times per week were 74% more likely to be considerate toward others.

“Our findings indicate that dog ownership may benefit children’s development and well-being and we speculate that this could be attributed to the attachment between children and their dogs. Stronger attachments between children and their pets may be reflected in the amount of time spent playing and walking together and this may promote social and emotional development,” professor Christian adds.

This study was observational, so for now at least, the study’s authors say they are unable to give an explanation for these findings. They believe future research should focus on if similar effects are seen among different types of pets.

The study is published in Pediatric Research.