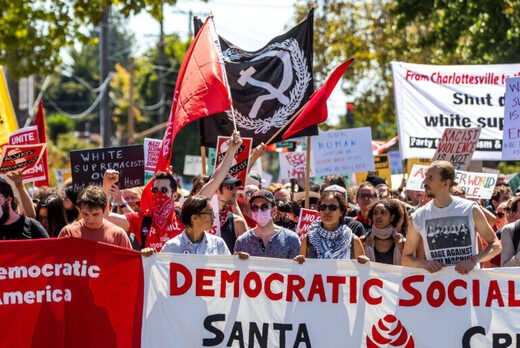 People with “dark” personality characteristics, such as psychopathy, as well as people with a greater sense of entitlement are more likely to be adherents of White Identitarianism or politically correct authoritarianism, according to new research that appears in the journal Heliyon. The findings suggest that those on the far-left and those on the far-right share some common personality dispositions.

“I became interested in the topic during my undergraduate degree. In the social psychology courses I took, it was clear that there were things you were ‘allowed’ to say and things you were not,” said study author Jordan Moss, a medical student at Sydney Medical School.

“For instance, the blank-slate hypothesis was maintained, and any comments appreciating the genetic contribution to individual or group differences were met with incredible resistance. At the time, I became aware of Jordan Peterson in his opposition to Bill C-16, and examples of ‘controversial’ speakers getting ‘cancelled’ at university campuses were becoming more frequent.”

“Since then, the influence of ‘cancel culture’ has grown to a point where traditional, center left voters appear to feel as if they need to distinguish themselves from those on the extreme, politically correct left. These ideas have real political and societal consequences, and despite their commentary in the media, there was absolutely no data on the psychological traits that contributed to them. This absence of data, the political influence, and societal prevalence motivated the paper,” Moss said.

The researchers found that those who scored higher on measures of psychopathy, narcissism, Machiavellianism and entitlement tended to display more attitudes consistent with political correctness authoritarianism and White Identitarianism, but not political correctness liberalism. In other words, participants who agreed with statements like “I honestly feel I’m just more deserving than others” and “Payback needs to be quick and nasty” were more likely to embrace coercive tactics to achieve social equality or embrace beliefs associated with white nationalism.

“The data indicates that from a Dark Triad perspective, authoritarian political correctness (advocates of cancel culture) have a similar psychological disposition as the extreme, White Identitarian right. While not contributing to their political orientation in the same way that the Big 5 personality traits do, ‘dark’ personality profiles appear to motivate the particular strategies that people use to achieve their ideological goals,” Moss told PsyPost.

“Specifically, people high in trait psychopathy may be more likely to use aggressive methods in pursuit of their ideal. This supports the ‘horseshoe hypothesis’ of politics: though there are real differences that distinguish the average left and right voter, as one moves further from the center, these differences decrease and the similarities of the extreme left and extreme right voter increase.”

For example, those who scored high on the measure of political correctness liberalism agreed with statements such as “There are no biologically based differences in personality, talent, and ability to reason, between racial groups” and “Lack of protestor resistance does not mean consent to intimate behavior, nor does silence mean consent.”

Those who scored high on the measure of political correctness authoritarianism, on the other hand, agreed with statements such as “It is wrong to criticize the status and rights of women under Islam because it is racist and disrespectful of multiculturalism” and “When a charge of sexual assault is brought forth, the alleged perpetrator should have to prove his or her innocence.”

“While this study provides evidence that authoritarian attitudes can be found on the political left and right, it does not report the prevalence of these attitudes. Further, political correctness appears to be disproportionately advocated by younger generations. Such analysis was out of the scope of the paper and would be incredibly useful,” Moss added.