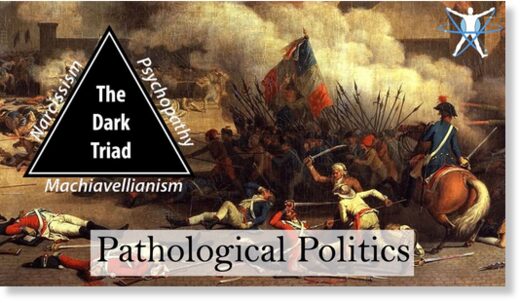 Narcissism, machiavellianism and psychopathy are the three components of what psychologists and social scientists call the ‘Dark Triad’ – personality traits that inform how one thinks and what one does. And dark they are because these personality features represent some of the very worst that humanity has to offer itself. As we continue to see the chaos and destruction being savaged on Western society by far left groups who claim to be fighting for justice and equality, some new studies go to show that their “liberal” sentiments belie a deeper pathology. What these activists are actually doing is acting out their Dark Triad tendencies – which fly in the face of the very values they claim to espouse and closely resemble their supposed political ‘enemies’ on the far right.

This week on MindMatters we delve into the world of extremist politics and entitlement to examine what really lies behind the righteous curtain of political ideology on the left and the right, and how more moderate voices are co-opted and exploited by their more radical confrères. ‘Politically correct liberals’, ‘politically correct authoritarians’, ‘white identitarians’: whatever the ideological mask, the root problem is the psychopathic element who influence and distort every type of belief system. When we realize that, perhaps we’ll be able to get somewhere.

For the paper discussed, see here.