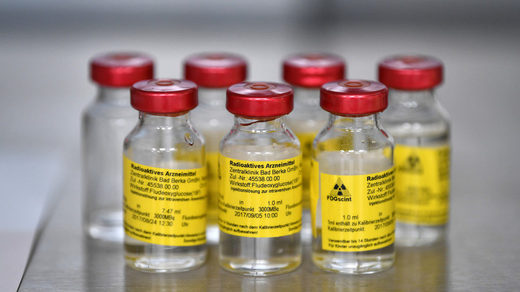 In 2017 a 69-year-old man living with pancreatic cancer was treated with nuclear medicine to shrink his tumor, but sadly died three days later and was cremated. New research suggests his remains may have spread radioactivity.

The man was treated by radioactive injection, and the dose of lutetium Lu 177 dotatate was still in his body when he was cremated, as staff at the hospital where he was treated were unaware of how badly his condition had deteriorated before it was too late.

While the administration of these drugs is tightly controlled and monitored, what happens after the treatment – especially when patients eventually die – is an entirely different story, as showcased in this particular case study by the Mayo Clinic. More than half of deceased Americans are cremated at present.

“Radiopharmaceuticals present a unique and often overlooked postmortem safety challenge,” Mayo Clinic researchers explain. “Cremating an exposed patient volatilises the radiopharmaceutical, which can then be inhaled by workers (or released into the adjacent community) and result in greater exposure than from a living patient.”

Almost a month after the cremation, hospital staff checked the cremation chamber and equipment, including the oven, vacuum filter and bone crusher, with a Geiger counter. They found elevated levels of radioactivity matching the radionuclide lutetium Lu 177 that was in the deceased man’s system.

“This wasn’t like the second-coming of Chernobyl or Fukushima, but it was higher than you would anticipate,” case co-author Kevin Nelson told The Verge.

The researchers tested workers at the facility for radioactive compounds. None matched lutetium Lu 177, but one man was found to have the radioactive compound technetium Tc 99m in his system despite never having undergone a nuclear medicine procedure.

The findings were reported in JAMA, and the case poses worrying questions about the collateral public health risks posed by treatment with nuclear medicine given that over 18.6 million such procedures involving radiopharmaceuticals are performed in the US each year.