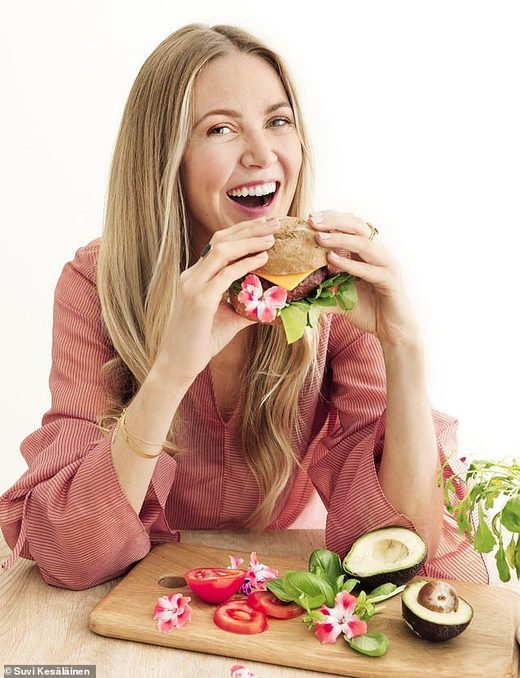 Early last year, Virpi Mikkonen was alarmed by the appearance of a rash on her face.

There were other problems: a bout of flu that was hard to shift; crumbling nails; feeling low; and, most worrying, her periods stopped. A blood test revealed her follicle-stimulating hormone (FSH) levels had sky-rocketed to the level at which women hit the menopause. Virpi was 37 and having hot flushes.

‘I thought, what’s wrong with me? I am healthy, I exercise,’ Virpi says. ‘I was really scared.’

At the time, Virpi believed herself to be eating the healthiest of all diets: gluten-free, grain-free, dairy-free, meat-free, refined sugar-free. And what’s more, she’d built a career inspiring others to eat it, too.

As ‘Vanelja’, Virpi is an award-winning blogger and entrepreneur championing plant-based eating. She has written four cookbooks, which include vegan alternatives for ice cream, pizza and cakes, and has 164,500 followers on Instagram.

Though based in Finland, she writes her blog and best-selling books in English, and this, together with pretty photos of her recipes on Instagram, has earned her a sizeable following among British foodies. Vogue called her ‘social media gold’.

Think of her as the Finnish equivalent of Deliciously Ella, the British food writer and creator of the coconut-and-oat energy ball which costs £1.79 a piece. Virpi’s version: Dreamy Blueberry Thyme cake, a ‘raw cheesecake’ made from dairy-free oat milk.

Yet the ‘clean’ vegan diet that she was promoting as a route to health was making her sick. She sought help from a specialist in Chinese medicine, who diagnosed a ‘yin deficiency’ (health depends on a balance of yin and yang, according to traditional Chinese medicine). She said Virpi should stop eating so much raw food – yet salad, juices and smoothies were the backbone of her diet.

‘She said everything had to be cooked, warming and earthy,’ Virpi recalls. Even more radical, the specialist said Virpi had to start eating animal products – daily. Virpi hadn’t eaten meat for 15 years, apart from when pregnant with her daughter Alva, now seven.

She admits she was ‘shocked’. But now she’s given up veganism, she feels much better.

‘I felt I had run out of fuel, totally,’ she says. ‘I was empty.’ She is now particularly fond of bone broth, a bone stock she has as a hot drink or adds to stews and soups. She’s also eating eggs, which is a major departure because she used to refer to them as ‘miscarriages of chickens’.

The effects have been dramatic. ‘It’s amazing. I feel energetic, motivated. I’m sleeping better, the hot flushes and aching in my body have stopped.’ Best of all, her periods have returned. She was so relieved she danced round her flat. ‘I thought, OK, now I am back on track.’

The vegan movement continues to grow, with demand for meat-free food increasing by 987 per cent in 2017. But Virpi is keen to highlight veganism has drawbacks.

‘It doesn’t work for everyone. It didn’t work for me,’ she says. The problem was not being vegan, per se, ‘it was the vegan diet and my stressful lifestyle.

‘I was working a lot, I had produced four books in two years. It was crazy. No wonder I had burn-out.

‘Some people need animal products for them to be healthy,’ she continues. ‘No one diet is going to suit everyone.’

For example, she once ate nothing but raw food for six months and now shudders at the memory. ‘If you live in Northern Europe, you can’t do raw food. You need something to warm you.’

Of course, veganism is great for animals and the planet, she says, and the rise in meat-free cookery is an important development. But she worries young people in particular might get swept along by the trend and ‘not know how to do it right’. You can be vegan and still have a poor diet, she says, especially with the growth in mass-produced vegan junk food such as pizza, burgers, and even ‘sausage’ rolls.

Virpi has yet to tell her followers the whole story, though recently posted about yin deficiency and ‘burn-out’. Her reluctance is more out of wanting to find the right time to bare her heart than fear of receiving irate messages, but she admits: ‘Vegans can be really judgmental.’
She’s right to be nervous. Dana Shultz, who lives in the U.S. and runs Minimalist Baker, a vegan recipe blog, was inundated with criticism when she announced she was going back to animal products after suffering digestive issues and hair loss.

Jordan Younger, aka The Blonde Vegan, received virulent attacks on social media, including death threats, after she wrote a blog post revealing an eating disorder and her decision to give up veganism.

Understandably, Virpi is keen to point out she is not the only high-profile vegan influencer to give up on a plant-based diet for health reasons. This year has seen a series of vegan vloggers confess they are now eating animal foods, including Londoner Tim Shieff, 31, a YouTuber known as the ‘vegan prince’, who revealed he’d abandoned his plant-based diet because it was making him ill.

‘I had some joint issues, chronic fatigue, and mild depression,’ he said. ‘My whole body felt like it was shutting down.’

He immediately felt better for eating meat: ‘I was so shocked . . . My depression lifted, joints feeling better, energy back in my body.’

‘There are lots of reasons for an unexpected early menopause – stress, trauma, lifestyle changes,’ she says.

But diet can also be a factor. ‘Cholesterol,’ Dr Gluck adds, is ‘the building block for all our hormones. Only animal products and fish contain cholesterol and it’s very, very important.

‘Our body does produce some cholesterol, but a big part comes from our food.’

A plant-based diet could result in very low levels of cholesterol. ‘That is probably what happened and why her periods stopped,’ says Dr Gluck. ‘When she started eating animal products she could make hormones again.

‘For some people, vegetarianism and veganism suits them well, and for others it doesn’t. Genetic factors mean some people produce enough cholesterol and others don’t. Most people need to top it up from food, especially women in their reproductive years.’

I meet Virpi in her flat in Helsinki, where she lives with her partner, Finn, a director, and their daughter, Alva. She offers me herbal tea in a delicate china cup (she never drinks coffee) and some oat biscuits with wild blueberries.

She only moved in two weeks ago, but her flat is looking beautiful and feminine: cream floorboards, soft cushions, calming tones, lovely flowers. Virpi admits she is a girlish 38 and says the lurch to menopause was devastating.

‘It was a huge thing to think, this is where my fertility stops,’ she says, her eyes filling with tears. ‘You think you’re still young and then suddenly the doctor says, “You are in the menopause! You have to start taking HRT”!’

She didn’t follow the doctor’s advice because her mother took HRT when she had the menopause at 46 and developed breast cancer. ‘That was 15 years ago and she’s fine now, but I didn’t trust it. I like to follow the natural approach.’

She grew up, an only child, in Oulu, northern Finland, and reminisces happily about the ‘Finnish diet’: meat, potatoes, bread – though she put her foot down aged two.

‘My mother was explaining where milk came from and how it comes from cows’ teats and I was like, OK, not for me.’ She’s refused to drink milk ever since.

She became a vegetarian at 14 after reading an expose of how animals are treated in the food industry. But it was hard being a veggie in Nineties Finland, and her mother worried she wasn’t getting enough to eat. She took it up again at 22, and moved to Helsinki in 2009 after being offered a job as beauty editor for Trendi, one of the leading lifestyle magazines in Finland.

‘Work got stressful and I started to have heath issues. My stomach was bloated all the time and I had red blotches on my face.’

Hospital tests came back negative. ‘They said “there’s nothing wrong with you”.’

But then she came across a series of online gurus offering messages of reassurance: eat this way and I will make you healthy again.

Virpi entered the realm of ‘clean eating’ – a diet which promotes eating food in its purest form: ‘natural’, ‘real’, unprocessed. It was a reaction against a ‘toxic’ food world: convenience foods; salty, oily, sugary snacks; cheap, sweetened drinks; and meat from inhumane battery farms, which brought warnings of ill health: anything from allergies to cancer.

‘These online experts seemed healthy, inspiring, and challenged the old way of thinking: doctors know what’s best for you.’

After she gave up gluten and sugar, her symptoms improved. ‘I gained a lot of energy, I wanted to run down the street, I was so excited – this is a new world!’

Her editor-in-chief asked her to blog about her diet transformation for Trendi magazine’s website. She read books and online articles. She trained as a health coach (with the Institute of Integrative Nutrition, a U.S.-based online company) while on maternity leave, and in September 2014 she set up her blog, Vanelja, rather than return to her magazine job.

If the blog laid the groundwork, Instagram did the rest. She started sharing her rainbow-coloured smoothies and sweet potato pizzas. In 2015, she was picked by Instagram as an account to follow. ‘When I went to sleep I had around 5,000 followers; the next morning I had 70,000. It was crazy.’

Her ‘clean’ diet segued into veganism, though she says she was never 100 per cent vegan.

But then in February 2018 she started feeling weak and was troubled by headaches, dizziness, and an irregular heartbeat. Rosacea, swollen red bumps, broke out on her nose and cheeks.

‘But the most alarming thing was my period stopped,’ she recalls. ‘I was like, OK, what is going on? I’d never had any problems.’

She didn’t think her diet could be to blame as previously a change in diet had transformed her health.

‘It’s much harder to get enough protein on a vegan diet, and lack of protein can make someone ill,’ says Jane Clarke, nutritionist and founder of Nourish, a website offering dietary advice and recipes for people with health problems.

‘Protein is the basis of every living cell. Lack of it can compromise your ability to fight off disease and make you feel depleted. It’s also hard to get enough omega-3s, essential fatty acids that reduce inflammation and are usually found in fish.’

‘Another reason you might feel unwell on a vegan diet is that you don’t take in enough creatine. This is only found in meat and fish and our body uses it to help generate energy in our muscles. Without it you can feel exhausted.’

Lack of iron is yet another potential problem. ‘While you can get iron from green leafy vegetables, you have to be very careful about not having enough.’

I ask Virpi if she feels let down after putting such faith in the diet. ‘No,’ she replies. ‘I’ve always been someone who likes to find out the truth, likes to know myself better. It’s just a learning experience through trial and error. Besides, I’ve never promoted any one diet.’

Virpi’s daily diet now includes an omelette for breakfast; meatballs or chicken made from organic meat with cooked vegetables for lunch; and a meat soup for supper.

She eats butter and goat’s cheese, but still only drinks oat milk, and avoids gluten, starch and refined sugar. Animal rights are still important to her, so she only eats organic or ‘wild’ meat.

‘Maybe if I’d had a super-relaxed lifestyle somewhere in Hawaii I wouldn’t have had any problems being vegan. But in this life I am living, the diet didn’t work for me and that is totally OK.’