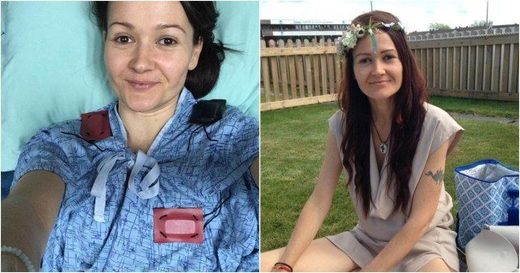 A mum who was diagnosed with treatable breast cancer has died after shunning medicine in favour of living a vegan and holistic lifestyle.

Katie Britton-Jordan, from Dalbury Lees, Derbyshire, was told she had triple negative breast cancer in July 2016 after finding a lump in her breast while feeding daughter Delilah when she was three.

She was offered a mastectomy, chemotherapy and radiotherapy that would save her life but instead chose alternative methods including taking up a vegan diet.

He said: ‘It breaks my heart to be writing this but on Saturday 25th May, Katie, with the same grace and strength she handled herself through life, peacefully passed to the next.

‘She was surrounded by family and friends and shrouded with love.

‘Delilah, her “bestie” Elsa and I went and picked flowers and herbs from the garden and placed them all around Katie, she looked so serenely beautiful….

‘Our little girl has learnt the hardest lesson at such a young age and I simply run out of answers when sobbing she asks “why we have to say bye bye?”

‘We cuddle for a mo’ and then she’ll suddenly tell a little story of what or how mummy would do it, start to giggle and right there! I can see the spirit, resilience, strength and everything that was and will always be in her Mamma, in our little girl. She hasn’t gone far yo’.

‘Feel free to leave comments just, please be thoughtful and respectful. I know some people may have their own opinions on what Katie should or should not have done but whatever that is, it does not alter her bravery and dignity over the last 3yrs.’

Speaking two years ago about her decision not to have life-saving treatment, Katie said: ‘I feel really fit and well and I’m still able to work and look after my daughter. My diet, which involves mainly raw fruit and vegetables, has really helped.

‘If I had chemo, I think I would be almost bed-ridden. I have seen friends have chemotherapy and they are affected for life by it. It’s horrible.

‘You are poisoning your body. In my opinion, there are lots of options out there that I think are much more valuable than poisoning yourself.’

Despite her doctors’ advice Katie felt her decision had been an informed one. Her stage 2a cancer developed into stage 4 cancer, spreading to her lymph nodes in her neck, lungs, liver and bones.

As well as the vegan diet, Katie increased the number of supplements she took including iodine rich brown seaweed, raw turmeric, black pepper capsules and used a hyperbaric oxygen chamber.

She sought out immunotherapy outside the UK and raised funds through followers on Facebook of Katie’s Page.

She said: ‘I have looked at medically-based books and films that shows if you remove the primary tumour, it gives off cancer cell inhibitors and removing it can activate circulating cancer cells that are in the body and there is nothing to stop them.

‘If you remove it, it can come back much more aggressively. I believe what I am doing is the best option for me.‘

After discovering the lumps on her breast, doctors told her there were three tumours and the best course of action would be to remove it. Without treatment, they told her, she would die.

Katie added: ‘It all happened really quickly. I went home in a bit of a daze and tried to digest everything.

‘I have always been into alternative health. I started researching and decided there was no way I was having chemotherapy and radiotherapy. Initially I wasn’t sure about the surgery.

‘I didn’t know if it was a good thing or a bad thing but the more I read into it, the more I decided I didn’t want to do it either.’

She said: ‘I had always had a healthy diet and I didn’t eat red meat but I decided that I would go completely vegan and cut out sugar and gluten. I eat mostly raw food.’

Instead of having CT scans on the NHS which involve radiation Katie decided to go for private thermographic imaging scans.

These scans use a heat camera to show if new blood supplies are being formed, indicating tumour growth.

Initially, the scans showed that her condition was stable but in March 2017, a scan showed new blood supplies and she went to hospital for the first time since diagnosis for an ultrasound scan.

She said: ‘The others are fairly stable and haven’t changed much but I have introduced other supplements since we saw the new tumour.’

Dr Catherine Zollman, a GP for over 20 years and medical director of Penny Brohn UK, said: ‘We’ve learned over 35 years of supporting people affected by cancer that you can combine the best of the lifestyle, dietary and complementary treatments alongside conventional treatments such as surgery, chemotherapy and radiotherapy, and by doing this, you can reduce side effects, improve wellbeing and have a better chance of long-term survival.

‘In the case where the treatment offered on the NHS is potentially curative, treatment and monitoring are really important. If you miss that window, the potential for cure may no longer be there.

‘Nutritional approaches, physical activity, mindfulness-type training and complementary treatments can have an important place in helping people to take back some control over their health, helping to manage the side effects from the conventional treatment and supporting mental and physical wellbeing. With the correct support, you can have a very helpful combination of the two approaches and, for many people, this integrated approach works much better than either approach on its own.’