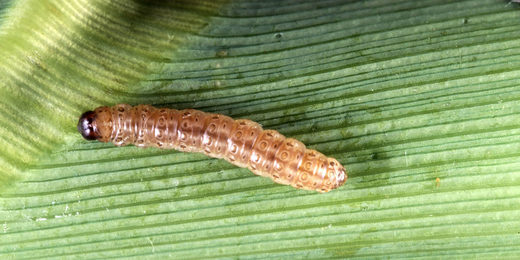 In Nova Scotia, corn farmers are observing that the European corn borer, an insect pest, has developed resistance to the genetically engineered (genetically modified or GM) trait designed to kill it.

This is the first report in the world of the European corn borer (ECB) developing resistance to a genetically engineered trait used to confer insect resistance. It is also the first report in Canada of any insect pest developing resistance to a genetically engineered trait. The development of resistance in other insect pests targeted by Bt (Bacillus thuringiensis) traits in corn has been observed in the US, South Africa and Brazil.(2) Additionally, in the US and other countries, some cotton pests have also developed resistance to Bt cotton traits.

“This is an important reminder that nature can adapt to and overcome genetically engineered traits,” said Lucy Sharratt of the Canadian Biotechnology Action Network.

In Canada, single-trait Cry1F corn seed is sold under the brand “Herculex 1” by Corteva (owned by DowDuPont). The genetically engineered Cry1F protein is also “stacked” with other Bt proteins (as well as herbicide-tolerant traits) in other GM corn varieties. Corn with Cry1F is sold in Canada by the companies Syngenta, Corteva and Bayer.

When it first approved GM insect-resistant corn in 1996, Canadian government regulators acknowledged that the European corn borer could develop resistance to Bt traits.(1) To delay the expected resistance, farmers planting GM corn are required to also plant a structured non-Bt refuge of 5%-20% where susceptible insects can reproduce.

To deal with newly resistant ECB and delay further resistance, the Canadian Corn Pest Coalition is advising farmers to buy corn with at least two other Bt traits stacked together in the one seed.(2)

“We’re concerned that seed costs will rise with an increasing reliance on stacked GM traits, while insects continue to evolve resistance,”(3) said Sharratt. “These genetically engineered plants are starting to fail, as was predicted, and are part of a costly technology treadmill.”

Genetically engineered Bt insect-resistant crops are designed to replace the use of certain insecticides but the federal government does not track how much or where Bt and other GM crops are grown in Canada, or how they affect pesticide use.

The Canadian Biotechnology Action Network estimates that over 80% of Canada’s grain corn is genetically engineered, most carrying multiple GM traits for both insect-resistance and herbicide-tolerance.(4)

(1) For this citation (endnotes 154 and 157) and other details, see the 2015 report from the Canadian Biotechnology Action Network “Are GM Crops Better for the Environment?” www.gmoinquiry.ca/environment
(2) European Corn Borer Resistance to Bt Corn Found in Canada, Tracey Baute, Baute Blog, Field Crop News, Ontario Ministry of Agriculture, Food and Rural Affairs. May 10, 2019. http://fieldcropnews.com/2019/05/european-corn-borer-resistance-to-bt-corn-found-in-canada/
(3) On seed price increases see “Are GM Crops Better for Farmers?” Canadian Biotechnology Action Network, 2015. www.gmoinquiry.ca/farmers
(4) Statistics Canada tracks the amount of genetically engineered grain corn grown in Quebec and Ontario: 87.7% of the corn grown in both provinces together is GM, and the two provinces account for 80% of Canada’s total corn acres.

The Canadian Biotechnology Action Network (CBAN) brings together 16 groups to research, monitor and raise awareness about issues relating to genetic engineering in food and farming. CBAN members include farmer associations, environmental and social justice organizations, and regional coalitions of grassroots groups. CBAN is a project on the shared platform of Tides Canada.