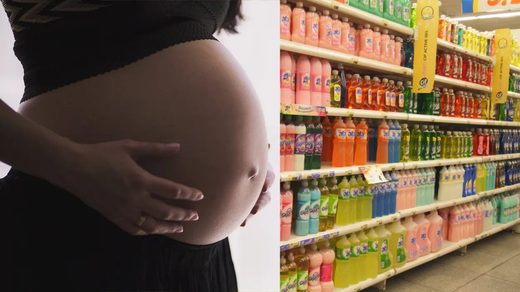 Researchers found that exposure to certain chemicals in consumer products during the first trimester of pregnancy is linked to lower IQ in children by age 7. Among the first of its kind, the study, carried out by scientists from the Icahn School of Medicine at Mount Sinai and Karlstad University, Sweden, linked mixtures of suspected endocrine-disrupting chemicals to prenatal neurodevelopment.

The research analyzed data from SELMA, a study of Swedish mothers and children during the first trimester of pregnancy, measuring 26 chemicals in the blood and urine of 718 mothers. The chemicals included bisphenol A (BPA), commonly found in plastic food and drink containers, as well as pesticides, phthalates, and others. Some of the 26 are established to affect the endocrine (hormone) activity while others are suspected to do so.

The scientists revisited the families when children reached age 7, finding that the kids whose mothers had greater amounts of chemicals in their system while pregnant exhibited lower IQ scores. This particularly affected boys, whose scores were two points lower. From all the chemicals, the greatest contribution to lower IQ was found to be from the compound bisphenol F (BPF), a BPA-replacement.

Many of the chemicals only stay in the body for a short period of time, indicating that even being exposed to them briefly can have a negative effect. Previous studies linked endocrine disruptors to neurodevelopmental issues in children.

Eva Tanner, PhD, MPH, a postdoctoral researcher in the Department of Environmental Medicine and Public Health at the Icahn School of Medicine at Mount Sinai, put their study in perspective: “This study is significant because most studies evaluate one chemical at a time; however, humans are exposed to many chemicals at the same time, and multiple exposures may be harmful even when each individual chemical is at a low level,” said Tanner.

Professor Carl-Gustaf Bornehag of Karlstad University reiterated that being exposed to chemical mixtures in regular consumer products can affect the developing brains of children. Even chemicals that are supposed to be safer, like BPF, are not likely any better.

The scientists call for more research to confirm and expand upon their findings.

Check out the study here, published in Environment International.