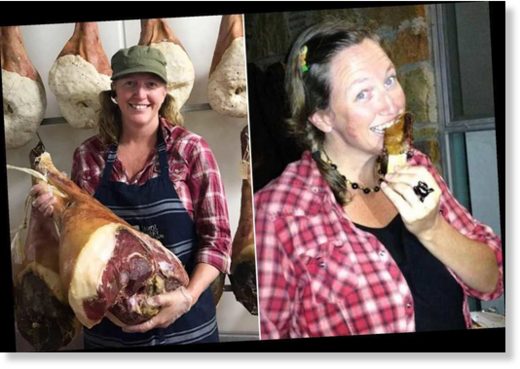 That must have been some burger!

Tammi Jonas, a longtime vegetarian living in Victoria, Australia, had a surprising — but undeniable — craving for a hamburger while pregnant with her third child. Just one prime patty after many meat-free years.

Now, she’s a professional butcher and a pig farmer.

The 49-year-old stopped eating meat when she was 19 — after reading Australian philosopher Peter Singer’s book “Animal Liberation,” published in 1975. She maintained her V-card successfully through two pregnancies, but while carrying her third child, she also became “dangerously anemic.”

After the iron supplements failed, she pondered if protein would be the best way to get healthy for her and her baby.

“I was at work one day and just thought: ‘A burger would fix this,'” Jonas told 10 Daily.

Over time, the reluctant meat-eater gradually worked her way back into an omnivorous lifestyle.

“I went back to red meat, so beef and lamb, once a week throughout the pregnancy, and it was some years longer before I had any pork or poultry,” said Jonas, who explains that her beef with meat isn’t about killing animals.

Jonas knew firsthand what went down on farms, having grown up on a cattle ranch in rural Oregon before moving to Australia in the ’90s. So her move back to the land didn’t surprise her.

“When you’re from land, it’s in your bones,” she explained. 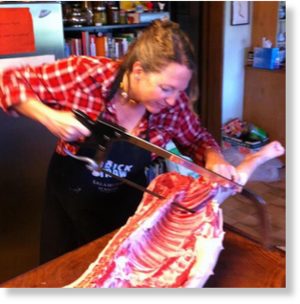 Her foray into not only eating meat again, but actually producing it, comes from a motivation to make positive change. After a lot of research and planning, she and her husband, Stuart, decided to open a small, sustainable farm in Victoria’s Central Highlands, that promises to treat their porkers with respect.

“The penny dropped, and we realized that we were going to be farmers and, for me, I knew immediately pigs because they are some of the worst treated in industrial systems,” said Jonas of their decision to build Jonai Farms.

Although she fears that slaughtering the pigs off-site is too much for her hogs to handle — and she’s still coming to terms with that.

“I think they find all of that stressful, and we’d like to take that part of the stress out of our system and be able to walk them to a death they didn’t know was coming,” she said, adding that she feels “most justified” as a meat-eater when she knows they experienced “no fear, no pain.”

Jonas continues to support the cause of vegetarians, but hopes to find “the best way to eat on a finite planet,” and said farms like hers can “help reverse, or at least mitigate climate change.” She just hopes her vegetarian friends can accept her new lifestyle — while also calling out the booming plant-based meat industry.

“Hats off to you if you don’t want to participate in any livestock production, but try not to have too hard a go at those of us who are trying to restore landscapes with livestock,” she said, adding, “and doing a much better job of it than your vegan impossible burger.” 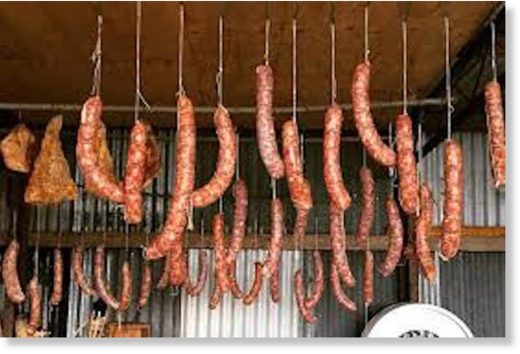