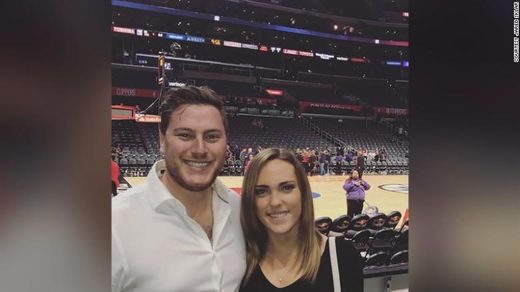 Jared and his girlfriend, Samantha, during their lifestyle change.

In May 2018, Jared Sklar’s wake-up call was waiting for him when he got home from work. He opened the fridge and saw four different pizza boxes from four different restaurants.

“It’s pretty embarrassing, but it’s the truth,” Sklar said. “I just opened the door, and I was just like, ‘What are we doing here?’ “

At 285 pounds (129 kilograms), he would sit on the couch and watch TV, with no energy left after conquering the work day. Late-night snacks included popcorn and ice cream. The 27-year-old, who works in sales for Corporate Strategies in Woodland Hills, California, knew something had to change.

And gradually, his clothes felt like they were getting smaller every time he did laundry.”It gets to that point where you realize that you’re getting bigger; the clothes aren’t getting smaller,” he said. “It was that a-ha moment.”

There were other epiphanies as well. Sklar missed the feeling he got when he used to play sports as a teenager. And there was a history of heart disease in his family.

Together, he and his girlfriend, Samatha MacDonald, decided to make a lifestyle change. They had talked about doing it before, but this time, it stuck. They didn’t want to look back 20 years from now and realize they could have made changes to be healthier then.

First, they would start going to the gym. But they didn’t want to put in the hours of fitness without having the right diet to fuel it and bring up their energy levels.

Other diets sounded too quick for what Sklar wanted to do. He researched intermittent fasting and decided to try it as a sustainable long-term option.

Sklar and MacDonald would eat their meals between 12 p.m. and 8 p.m. each day, creating a 16-hour break before eating again. This helped them kick the late-night snacking habit.

“I like time restricted feeding because it allows you to naturally reduce your food intake without counting calories,” said Lisa Drayer, CNN contributor and registered dietician. “You eliminate mindless nibbling in the evening and you’re also eating in sync with your circadian rhythm so you’re front loading your calories, which is more favorable for weight loss.”

They immediately noticed their energy levels start to pick back up as they swapped out pizza for proteins like turkey alongside vegetables, spaghetti squash instead of spaghetti and Greek yogurt bars instead of ice cream.

“When you’re eating only during an eight-hour period, you do want to follow good nutritional guidelines, including protein, fiber, enough fluids in your diet as well,” Drayer said.

Sklar loved eating healthier options, but sometimes had a hard time getting up to go to the gym. For MacDonald, food was a weakness, but she was excited to get up and work out.

“We pushed each in our weak areas,” MacDonald said. “We were on different pages initially but pushed each other to be on the same page, and that was a huge help.”

Sklar was also dealing with a chronic hamstring issue, discovered by his doctor after playing flag football and repeatedly pulling his hamstring before the diet. His doctor recommended low-impact exercise, which led Sklar to try indoor cycling. He went to the gym six days a week and pedaled for 45 minutes each day.

The couple tried working out together, but found they slowed each other down. While Sklar was pedaling at the gym, MacDonald found that working out at a high-intensity interval training studio worked better for her.

Sklar and MacDonald also cut back on carbohydrates and replaced a lot of the red meat in his diet with leaner proteins like fish, chicken or ground turkey. They became more conscious of what they were eating overall, making healthier decisions during their eight-hour window each day
.
“If you’re only eating in these eight hours, it’s powerful to choose what you put into your body,” MacDonald said.

The first month, he had lost 15 pounds (6.8 kilograms) while cycling and starting intermittent fasting. It continued for the next six months. Sklar fell in love with cycling. The combination of the music and the calories burned during each session fueled him to continue.

“When you see that person in the hospital going through that, you just think to yourself that you never want that to happen to you, and you want to prevent it from happening to anybody else that you know,” Sklar said. “That was my why. That was a light bulb moment where I knew I had to not only keep this going, lose the weight for me, but I also needed to keep it going for my future self and everybody else around me.”

Over a six to seven-month period, Sklar lost 95 pounds (43 kg). Eventually, one of the instructors pulled Sklar aside and told him he should start teaching an indoor cycling class. He’s been teaching for about six months now.

For MacDonald, the changes have been more mental than physical. She lost 12 pounds (5.4 kilograms) and loves feeling stronger.

“On a busy day, the hour I’m going to the gym is something I’m giving myself,” she said.

“When you realize you’re gaining more muscle and feeling better every day, you can feel yourself getting stronger. That was a big thing. I had never stayed with a workout long enough to feel those changes after months. It makes me feel better every day to slowly see these changes in my body.”

In the morning, Sklar usually has a glass of water after getting up. Lunch is at noon, followed by snacks throughout the day. Before a workout, Sklar enjoys peanut butter and jelly on a rice cake.

“I teach a spin class at 5:30 at night, then I’ll have a protein shake and dinner right after, and then I’ll maybe have a small snack at 8:00 p.m. I fast for the rest of the night until noon the next day.”

After the initial weight loss, Sklar and MacDonald are allowing for a little more flexibility if they have a special event. But they are committed to being as healthy and fit as possible for the long-term. Intermittent fasting helped them form healthy habits. Sklar is also training for a triathlon now. 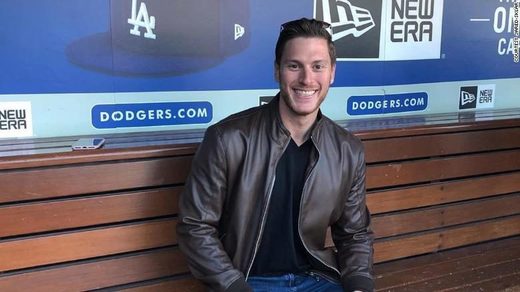 Sklar is much more energetic and confident after his weight loss.

“There’s always something in front of me to keep me motivated, to make sure that I don’t fall back into my old habits,” Sklar said.

Sklar is continuing to fast and maintain an active lifestyle. He’s more confident , energetic and positive. Sometimes, old friends and coworkers don’t recognize him. As his story spreads, Sklar has been able to reconnect with friends or acquaintances and share advice on weight loss and fitness. Sklar didn’t realize how much it would mean to him.

“I found that in the long run, I was doing it for my friends, as well, because they found inspiration from it,” Sklar said.

Being able to make this lifestyle change with his girlfriend has made all the difference, Sklar said.

“It was hugely beneficial to have a support system with me,” Sklar said.

“There’s always going to be those days where you want to cheat and have a pizza, and just having a support system to keep you in check and being responsible for keeping somebody else in check was really important, to me.”