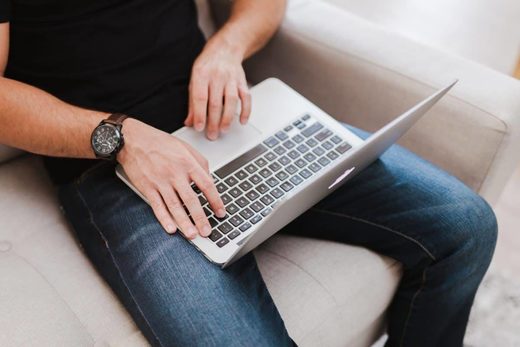 As many as 16 different reviews also show that exposure to other microwave EMFs is directly associated with these same effects as well as others, proving that living in the wireless age isn’t nearly as safe as health authorities in collusion with the telecommunications industry would have us all believe.

Experts say that the predominant mechanism of action with EMFs – meaning the primary way that these invisible pollutants can harm your body – is through what’s known as voltage-gated calcium channel (VGCC) activation.

According to science, VGCC activation caused by EMFs can eventually lead to cancer – though the general public isn’t being told any of this, of course.

There are also said to be numerous other mechanisms through which WiFi and other forms of EMs can cause bodily harm, including through the activation of other voltage-gated ion channels, as well as via the geomagnetic magnetoreception mechanism and through calcium cyclotron resonance.

If you’re curious, the paper provides a more thorough breakdown of the established effects of WiFi and other EMFs as produced by VGCC activation. These are available in Table 3 of the study.

The paper further explains that EMF effects are often cumulative, which is really bad news when considering just how many of them we’re all exposed to these days. EMFs are also more negatively impactful on young people than they are adults, which is hardly surprising.

Despite having been declared by the telecom industry to be 100 percent safe with no need to study it further, WiFi has been shown in at least 23 different controlled scientific studies to cause the aforementioned health-related effects in mammals, as well as lowered male fertility and hormonal damage.

To keep up with the latest news about 5G, another source of highly damaging EMF pollution, visit 5Galert.com.

EMFs can damage the body by elevating peroxynitrite levels, leading to cancer-causing oxidative stress and inflammation

The most significant pathophysiological effects of EMF exposure are reportedly generated via excessive calcium signaling, which we previously covered, as well as through what’s known as the proxynitrite pathway, with peroxynitrite levels becoming elevated due to increases in both nitric oxide (NO) and superoxide.

When it reacts with its carbon dioxide (CO2) adduct, proxynitrite can actually break down to produce reactive free radicals, including hydroxyl radical, carbonate radical, and NO2 radical, all of which create damaging oxidative stress that can lead to chronic disease.

This oxidative stress also has the potential to elevate NF-kappaB activity resulting in chronic inflammation, which we know from science lies at the root of nearly all expressions of chronic illness, including cancer.

The chart below shows the various pathways of action by which EMF VGCC activation can produce the various negative effects instigated by EMF exposure: 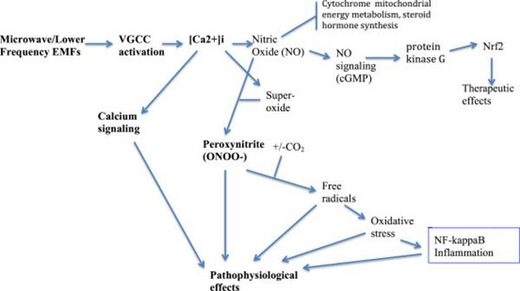 Recognizing that one of the best solutions to oxidative stress and its associated inflammation is to consume more antioxidant nutrition, one obvious natural remedy to all of this would be to simply intake more vitamin C, presumably from whole food sources.

Vitamin C rich foods include the usual suspects like oranges, lemons, and other citrus fruits, as well as “Super C” superfoods like camu camu berry and acerola cherry, foods that respectively contain the world’s highest natural levels of vitamin C.

Other antioxidants that can help protect you against WiFi and EMF exposure include zinc, a key component of metabolism and immune function, as well as selenium, a powerful antiviral antioxidant.

Other antioxidant-rich foods that may help to protect against WiFi and EMF damage include cruciferous vegetables like broccoli and cauliflower, seed-dense berries like raspberries, cherries, watermelon, artichokes, and leafy greens such as spinach.

Be sure to check out the complete study for more information about the damaging impact of WiFi and EMFs on the human body.

You can also learn more about the damaging effects of EMF exposure by visiting EMF.news.

Sources for this article include: