For Japanese workers in big cities, a typical work day begins with a state called sushi-zume, a term which likens commuters squeezed into a crowded train car to tightly packed grains of rice in sushi.

The stress doesn’t stop there. The country’s notorious work culture ensures most people put in long hours at the office, governed by strict hierarchical rules. Overwork is not uncommon and the last trains home on weekdays around midnight are filled with people in suits. How do they manage?

The secret may have to do with what Japanese call ikigai. There is no direct English translation, but it’s a term that embodies the idea of happiness in living. Essentially, ikigai is the reason why you get up in the morning.

To those in the West who are more familiar with the concept of ikigai, it’s often associated with a Venn diagram with four overlapping qualities: what you love, what you are good at, what the world needs, and what you can be paid for. 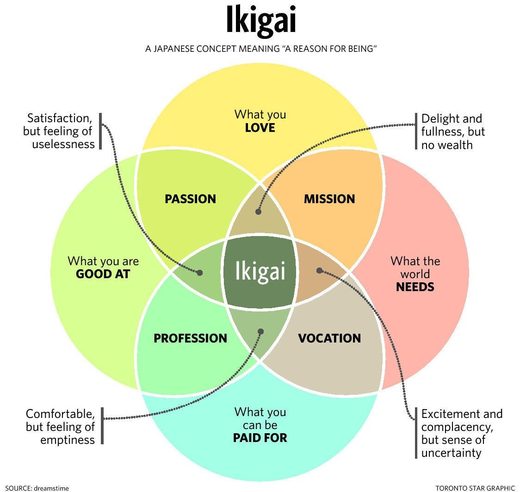 This balance is found at the intersection where your passions and talents converge with the things that the world needs and is willing to pay for.

For Japanese however, the idea is slightly different. One’s ikigai may have nothing to do with income. In fact, in a survey of 2,000 Japanese men and women conducted by Central Research Services in 2010, just 31% of recipients considered work as their ikigai. Someone’s value in life can be work – but is certainly not limited to that.

In a 2001 research paper on ikigai, co-author Akihiro Hasegawa, a clinical psychologist and associate professor at Toyo Eiwa University, placed the word ikigai as part of everyday Japanese language. It is composed of two words: iki, which means life and gai, which describes value or worth.

According to Hasegawa, the origin of the word ikigai goes back to the Heian period (794 to 1185). “Gai comes from the word kai (“shell” in Japanese) which were deemed highly valuable, and from there ikigai derived as a word that means value in living.”

There are other words that use kai: yarigai or hatarakigai which mean the value of doing and the value of working. Ikigai can be thought of as a comprehensive concept that incorporates such values in life.

There are many books in Japan devoted to ikigai, but one in particular is considered definitive: Ikigai-ni-tsuite (About Ikigai), published in 1966.

The book’s author, psychiatrist Mieko Kamiya, explains that as a word, ikigai is similar to “happiness” but has a subtle difference in its nuance. Ikigai is what allows you to look forward to the future even if you’re miserable right now.

Hasegawa points out that in English, the word life means both lifetime and everyday life. So, ikigai translated as life’s purpose sounds very grand. “But in Japan we have jinsei, which means lifetime and seikatsu, which means everyday life,” he says. The concept of ikigai aligns more to seikatsu and, through his research, Hasegawa discovered that Japanese people believe that the sum of small joys in everyday life results in more fulfilling life as a whole.

A concept for longevity? 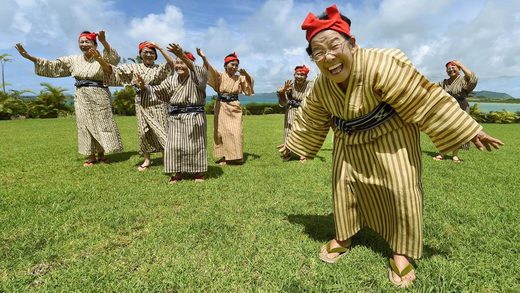 Japan has some of the longest-living citizens in the world – 87 years for women and 81 for men, according to the country’s Ministry of Health, Labor and Welfare. Could this concept of ikigai contribute to longevity?

Author Dan Buettner believes it does. He’s the author of Blue Zones: Lessons on Living Longer from the People Who’ve Lived the Longest, and has travelled the globe exploring long-lived communities around the world, which he calls “blue zones“.

One such zone is Okinawa, a remote island with a remarkably high number of centenarians. While a unique diet likely has a lot to do with residents’ longevity, Buettner says ikigai also plays a part.

“Older people are celebrated, they feel obligated to pass on their wisdom to younger generations,” he says. This gives them a purpose in life outside of themselves, in service to their communities.

According to Buettner, the concept of ikigai is not exclusive to Okinawans: “there might not be a word for it but in all four blue zones such as Sardinia and Nicoya Peninsula, the same concept exists among people living long lives.”

Buettner suggests making three lists: your values, things you like to do, and things you are good at. The cross section of the three lists is your ikigai.

But, knowing your ikigai alone is not enough. Simply put, you need an outlet. Ikigai is “purpose in action,” he says.

For 92-year-old Tomi Menaka, her ikigai is to dance and sing with her peers in the KBG84 dance troupe, she told the Mainichi newspaper. For others, it might be work itself. 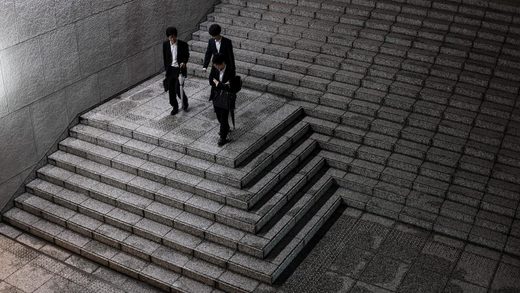 In a culture where the value of the team supercedes the individual, Japanese workers are driven by being useful to others, being thanked, and being esteemed by their colleagues, says Toshimitsu Sowa, CEO of HR consulting firm Jinzai Kenkyusho.

CEO of executive recruiting firm Probity Global Search Yuko Takato spends her days with highly qualified people who consider work as their ikigai and, according to Takato, they all have one thing in common: they are motivated and quick to take action.

“If you want to start a company but you are scared to dive into the unknown, go and see someone who is already doing something similar to what you have in mind.” By seeing your plans in action, Takato says, “it will give you confidence that you can do it too”.

That’s not to say that working harder and longer are key tenets of the ikigai philosophy – nearly a quarter of Japanese employees work more than 80 hours of overtime a month, and with tragic outcomes – the phenomenon of karoshi (death from overwork) claims more than 2,000 lives a year.

Rather, ikigai is about feeling your work makes a difference in people’s lives.

How people find meaning in their work is a topic of much interest to management experts. One research paper by Wharton management professor Adam Grant explained that what motivates employees is “doing work that affects the well-being of others” and to “see or meet the people affected by their work.”

In one experiment, cold callers at the University of Michigan who spent time with a recipient of the scholarship they were trying to raise money for brought in 171% more money when compared with those who were merely working the phone. The simple act of meeting a student beneficiary provided meaning to the fundraisers and boosted their performance.

This applies to life in general. Instead of trying to tackle world hunger, you can start small by helping someone around you, like a local volunteering group.

Retirement can bring a huge sense of loss and emptiness for those who find their ikigai in work. This can be especially true for athletes, who have relatively shorter careers.

Champion hurdler Dai Tamesue, who retired in 2012, said in a recent interview that the fundamental question he asked after he retired was: “what was it that I wanted to achieve by playing sports?”

“For me, what I wanted to achieve through competing in track and field was to change people’s perceptions”. After retiring, he started a company that supports sports-related business.

Tamesue’s story shows the malleable nature of ikigai and how it can be applied. When retirement comes, it is helpful to have a clear understanding of why you do what you do beyond collecting a payslip.

By being mindful of this concept, it might just help you live a more fulfilling life.