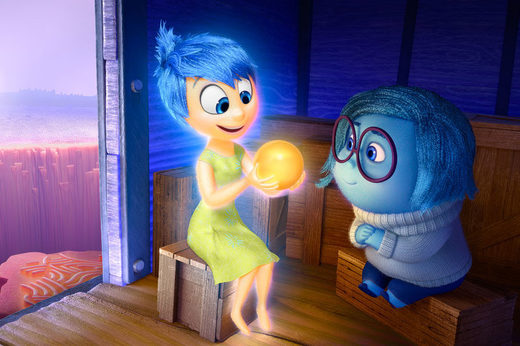 © Disney/Pixar
Joy and Sadness … ‘a new way to regulate your emotions.’

In the Pixar film Inside Out, the emotions of an 11-year-old girl are personified as perky Joy, petulant Disgust and hulking Anger. Sadness – voiced by The American Office’s Phyllis Smith – is, predictably, a downer with a deep side-parting and a chunky knit. Amy Poehler’s Joy can hardly stand to be around her, like a colleague you would time your trips to the tea point to avoid.

But the takeaway of the 2015 film – said by Variety to “for ever change the way people think about the way people think” – was that both emotions were necessary, and Sadness was as valid a part of life as Joy. Now there is a case for not only accepting Sadness, as in Inside Out – but embodying her, too. Researchers from Hong Kong and Texas recently found that individuals asked to think of their sadness as a person reported feeling less sad afterwards, a result they attributed to the increased distance perceived between the self and the emotion.

Study participants were asked to imagine Sadness’s personality, appearance, conversational style and how they might interact with them. In doing so, the idea was they would make it separate and less relevant to them. “The underlying mechanics of it is detachment – when they think about sadness as a person, it’s like they are endowing independence to the emotion,” says Li Yang, a graduate student at the University of Texas at Austin and corresponding author of the paper, published in September in the Journal of Consumer Psychology. “They feel detached from it, and that’s why they would feel less sad afterwards.”

Sadness is well established by research as leading people to focus on short-term and often indulgent rewards. By picturing their sadness with human traits and characteristics, study participants ameliorated its effect and were then more likely to display self-control. Such anthropomorphic thinking was even shown to be an effective advance strategy, preparing consumers to choose a healthier (or more practical) option.

“We think about it as a new way to regulate your emotions,” says Yang. There are obvious limitations to the study, she says – researchers investigated the short-term effects of anthropomorphic thinking on only sadness and its opposite emotion. Picturing happiness as a person also diluted its effect, suggesting the strategy could backfire.

It is also not known whether it would be as effective in detaching from other negative emotions, such as guilt or embarrassment, which are more inherently self-involved, says Yang. Depression, too, is far more complex than just sadness.

But many of us could benefit from better harnessing the power of the mind over emotions, as established time and again by research into emotional regulation. Even a simple change in language can help change your perspective.

Dr Ozlem Ayduk, a professor of psychology at the University of California, Berkeley, says 20 years of research has shown self-distancing to be important in minimising distress caused by negative memories or experiences. In early studies asking participants to assume the position of an observer, replaying “the scene in their mind’s eye, as if they were a fly on the wall”, was consistently linked to a lower emotional response – be that sadness, anxiety, anger or even anticipated instances of them in the future. Ayduk’s studies have shown such distancing to be effective whether imposed in study conditions or reached for spontaneously, and over a variety of different stress-inducing situations – from being called on to speak in public, to even thinking about the Ebola crisis. Moreover, the benefits seem to persist over time.

It works by creating an opportunity to process a difficult event, and reframe its meaning on the basis of its facts alone. “The problem, when we are in our own egocentric mode, is that we are feeling anxious, angry or sad and we can’t see it any other way, partly because of those emotions,” says Ayduk. “As you turn down the emotions, different perspectives become available – and as different perspectives become available, the emotions turn down.”

More recently, in looking for more techniques for emotional regulation, Ayduk and other researchers have turned their attention to internal monologue. In attempting to process and move on from difficult emotions or experiences, it is accepted that analysing them yourself can be helpful. But Ayduk says this can easily become unconstructive if it tips into rumination, a risk factor for depression and anxiety, that potentially increases their impact.

In a study published in the journal Nature in 2017, Ayduk and her collaborators found that switching your self-talk from first person to third person may be helpful in managing emotions during stressful times. The example they gave was a man upset about being dumped: he was found to be less emotionally reactive when he reflected on his feelings in the third person (“Why is John upset?”) than when he addressed himself directly (“Why am I upset?”)

Robust effects were recorded in study participants responding to distressing imagery and personal challenges. “We use names and third- and second-person pronouns to refer exclusively to other people, so, by making that switch in language as we reflect about ourselves, we could trick our minds to think about ourselves as if we are other people,” says Ayduk.

Talking about yourself to yourself as you would a friend is a common recommendation of therapists to highlight how hard we can be on ourselves, often without even realising it. But the science of self-distancing is more involved than our simply being kinder about others than we are about ourselves, says Ayduk.

“Most of us have experienced this. We seem to reason perfectly well about other people’s problems; it’s our own that we can’t reason through, and the reason for that is ourselves and our egos are in the middle of the situation – we feel threatened, we have biases, we have defensive reactions.”

A simple switch in pronouns manipulates the mind into creating psychological distance, allowing us to bypass some of those counterproductive mechanisms and to reason more objectively and perhaps come to terms with our emotions. The strength of the strategy lies in its relative simplicity, says Ayduk, especially compared with visualising yourself from a distance: “It’s easy to do because it’s something we’re so used to doing. Yes, you can pretend to be a fly on the wall, but it’s easier to have a parallel, internal monologue that you can modify.”

Ayduk’s collaborator Dr Jason Moser, an associate professor of psychology at Michigan State University and lead author on the 2017 study, notes that regulating your emotions is often thought of as a feat of self-control, as mindfulness and positive thinking take time and discipline to master.

But using the third person has been shown to take no more toll on the brain’s activity than using the first person, suggesting it could be a “relatively effortless” and effective means of managing your emotional response on the spot. “We’ve shown that it can help people manage their social anxiety or performance anxiety before giving a speech, before interacting with people they’ve never met before,” says Moser.

As a nervous flyer, Moser reaches for third-person self-talk himself: “I just start talking to myself: ‘Jason really hates turbulence. Why is Jason so worried about turbulence? Jason is worried the plane is going to crash.’ Then, naturally, I start giving myself advice as I would another person on the plane struggling with flight anxiety, such as: ‘Air travel is the safest form of travel; everything’s going to be fine.'”

Whether self-talk has a role in treating clinical depression, anxiety and other mental health issues is “the million-dollar question”, says Moser. It is currently being researched. As a clinical therapist by training, he is aware of the challenges – but the preliminary data as well as the literature already amassed suggests there is huge potential.

“The data all seems to point to the same bottom line: this is something you can give to people that they can use for processing memories from the past, things in the moment, as well as anticipating stressful situations in the future. That basically covers the gamut of things people are struggling with.”