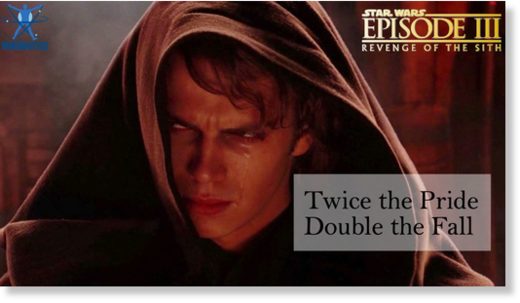 The tragic fall that started it all… Darth Vader: we’re all familiar with the hulking half-man half-machine embodiment of inhuman domination, brutal ambition and a malevolent will to rule the galaxy with a robotic fist – as portrayed in the very widely seen and loved Star Wars series. But as we look back at what made these almost mythical stories great to begin with, we are reminded of who this character was before he became such a powerful agent of the dark side. As shown in the Star Wars prequels, and particularly in the mostly-overlooked film, Episode III: Revenge of The Sith, we learn that the person who was to become Darth Vader, Anakin Skywalker, was first a Jedi, a prodigious and sincere student of the force, and one of a number of warrior priests who sought to protect the republic and fight for the side of the greater good.

On this week’s MindMatters we take a look into Anakin’s ‘darkened mind’ and the emotional and psychological processes he underwent that fueled his tragic descent to become Darth Vader, as well as the excellent portrayal of Palpatine’s manipulation of confused Anakin’s young mind. Revenge of the Sith may be one of the most relevant of the Star Wars movies for this very reason: in the context of a cosmic ‘space opera’, it teaches some all-important lessons on how our human frailties, worst instincts and egotistical natures can be played upon – and grown – to allow for some truly horrendous consequences. And may the force be with you, dear listener. Always.

An avid SOTT reader since 2011, Adam joined the editorial team in 2014 to help expose the lies being told by media organizations and governments, spread awareness of the corruption of science, and to keep the beacon of hope that is SOTT shining bright. He also knows kung fu.