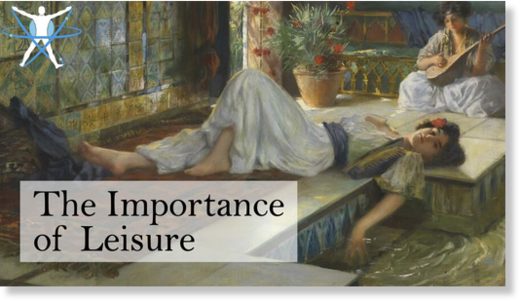 ‘Idle hands are the devil’s workshop,’ we’re told. This adage sometimes informs our mad scramble to make ends meet, quite often going non-stop and mostly living to work, with hardly a moment to see who, what and where we are in the vast context of our lives. Many of us are going nowhere fast. Though taking personal responsibility is correctly connected to paying the bills, and is crucial to any kinds of individual growth, there is another type of responsibility we have to ourselves that quite often gets lost in the shuffle in any real and valuable sense.

On this week’s MindMatters we look at philosopher Josef Pieper’s classic book Leisure: The Basis of Culture and use his ideas as a point of departure to discuss how we spend our free time (since, for the time being, we now seem to have so much more of it!). Among a wide range of issues connected to Pieper’s thesis, we ask what we should be doing with ourselves when we’re not “getting things done”, and what place philosophy, art and any number of other things that culture offers have in our lives. Ultimately, the underlying question is: What may feed the life of the mind in a time and place that is quite often so mindless?