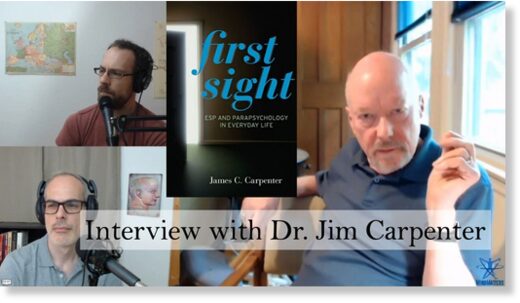 What is the nature of psi? How does it relate to consciousness? Today on MindMatters we interview Dr. Jim Carpenter about his “first sight” theory, the subject of his revolutionary book by the same name. Carpenter’s theory not only accounts for all the experimental data relating to psi; it also integrates current psychological research and a wider understanding of consciousness as a whole. Psi is not an anomaly or a special ability – it is fundamental to mind itself.

Dr. Jim Carpenter is both a clinical psychologist and a research parapsychologist. He is a Diplomate in Clinical Psychology, ABPP, and a Fellow in the American Academy of Clinical Psychology He formerly taught at the University of North Caroline in the departments of psychology and psychiatry. He has been active in the governance of several professional organizations, and carries on an active private practice.

Dr. Carpenter has published widely in psychology and parapsychology, with many research articles, book chapters and more popularly oriented pieces. For many years he has provided pro bono clinical consultation for persons who seek help with unpleasant experiences that they think of as psychic. His most substantial parapsychological contribution is a book developing a theory of psi, called First Sight: ESP and Parapsychology in Everyday Life (firstsightbook.com), published by Rowman & Littlefield. A more recent book contains a chapter summarizing some central ideas in the theory, along with another chapter placing the theory in the context of the philosophy of Alfred North Whitehead: Rethinking Consciousness: Extraordinary Challenges for Contemporary Science, edited by Buchanan and Aanstoos. His current research involves the prediction of the implicit contribution of psi information to the formation of ordinary preference judgments, using theoretically specified variables, thus shedding some light on how psi participates as “first sight” in everyday experience that people are not experiencing as “psychic.