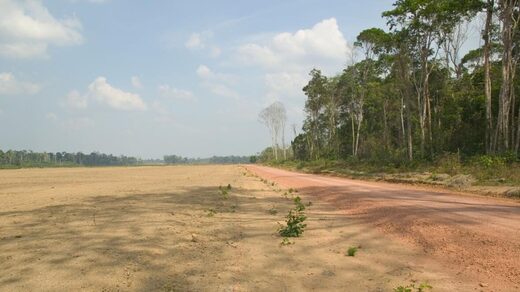 Environmentally conscious consumers who switch from cow’s milk to soya milk may be doing harm to the rainforest because it is cleared to grow soya beans.

Vast areas in South America, including in the Amazon, have been cleared to grow soya and demand for it continues to drive illegal deforestation.

Cows in Britain are fed partly on soya but a litre of soya milk requires 11 times as much of it as does a litre of cow’s milk, according to a new study. Britain imports 1.1 million tonnes of soya a year to be used in animal feed and between 92,000 and 173,000 tonnes is fed to cows. Soya accounts for only a fraction of the protein consumed by most cows, however, because most comes from grass.

The authors of the study from the University of Nottingham and the Sustainable Food Trust divided total UK cow’s milk production by the amount of soya fed to cows and found that each kilogram of soya could produce 85 litres of milk. By contrast a kilogram of soya produces between 4.25 litres and 7.5 litres of soya milk.

The study, in the Journal of Applied Animal Nutrition, concluded: “Milk produced from dairy cows given diets containing soya bean meal is a more sustainable use of land than producing human drink products directly from soya beans, especially when cows are grazed on pastures.”

Richard Young, policy director of the trust and one of the authors, said that the calculations did not take into account the impact of other types of feed given to British dairy cows, including palm kernel meal, which can come from plantations on recently deforested land. Milk from British dairy cows would, however, still cause much less deforestation per litre than soya milk when other feeds were included, he said.

Mr Young said that other plant-based milks also came with environmental problems: rice milk production required large amounts of water and almond milk was linked to the excessive use of pesticides and the death of bees. He said that oat milk may be the best plant-based option because it could be produced from crops grown in Britain, although it needed to be fortified with additives, was high in carbohydrates and “from a vegan perspective still depends on livestock, as the waste product is fed to pigs”.

Patrick Holden, the trust’s chief executive, said that the study “highlights the importance of grass, a crop ideally suited to our climate and the grazing animals that turn it into high-quality foods we can eat”.

Toni Vernelli, of the charity Veganuary, which encourages people to make a pledge to avoid animal products during the month of January, said that the study was wrong to suggest that cow’s milk was more eco-friendly than soya milk.

“Most of the environmental impact of cow’s milk comes from the cows themselves — in the methane they belch and fart out — not from the feed they eat,” she said.

“A 2018 study by Oxford University showed that producing a glass of cow’s milk results in almost three times more greenhouse gas emissions than any plant-based milk and it consumes nine times more land than any of the plant-based alternatives.

“Pasture-fed cows require even more land than those in intensive systems who are fed on soya, so from both a climate change and land-use perspective the [study’s] claim lacks all credibility.”